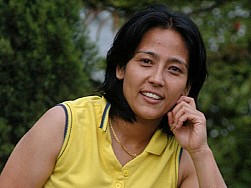 A cabinet meeting held at Singha Durbar on Thursday took a decision to this effect. Along with Baidya, the silver medalist squads of the Women´s SAFF Championship and the First South Asian Invitational Women´s Volleyball Championship will also be honored.

According to Minister for Youth and Sports Purushottam Paudel, the government decided to honor Sangina for her contribution to taekwondo. “The cabinet took the decision on the recommendation of the Ministry of Youth and Sports,” he said. He informed that Sangina will be awarded on March 8 on the occasion of Women´s Day.

Sangina became the first Nepali athlete to qualify for the Olympics after securing berth in the 2004 Athens Olympics through the Asian Qualifying Championship. She announced her retirement from the game in July 2009, and is currently working as a senior coach at the National Sports Council.

She has won medals in various international events. She claimed gold medals at the 12th Asian Taekwondo Championship (ATC) in 1996 in Australia, 8th SAG in Kathmandu and 9th SAG in Islamabad. Also, she won silver in the 11th ATC-Philippines and bronze in the 14th ATC Hong Kong-2000.