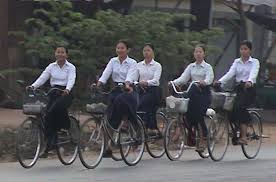 Like many people, Pok Ponnaka finds that being active helps her handle stress. After a long week of sitting in class memorizing, reciting and testing, the 16-year-old wishes she could participate in a weekend sports activity like soccer or basketball — just like her classmates who are boys do.

But she’s not allowed.

“I see most of my friends, they want to do sports, too, but they can’t,” the 11th-grader from Phnom Penhsaid. “We talked to the principal, but they said sport is not good for girls because you can get injured.”

In Khmer society, girls and women are often encouraged to be docile and obedient. In some families, girls are not allowed to participate at all in athletic events.

But that could be changing. An initiative in Cambodia is underway to increase the number of women and girls in elite and recreational sports ahead of the 2023 Southeast Asian Games, when Cambodia will host the event for the first time. The International Olympic Committee supervises the games, which feature both Olympic and non-Olympic athletic events.

“We can say now there is no more barrier of the culture, but it is still (there),” said Vath Chamroeun, secretary general of the National Olympic Committee of Cambodia, during an interview at his office.

Though Cambodia was one of the original founders of the Southeast Asian Games back in 1959, the country has never held the biennial sporting event, and the pressure is on to show Asia — as well as the world — that the country is open, accessible and friendly to female sports.

That means identifying, recruiting and retaining more female elite athletes; holding outreach events; and working with the Ministry of Education, Youth and Sport to place more of an emphasis on sports and health in schools, Chamroeun said.

Women currently make up less than 10 percent of sports management roles and about 20 percent of elite athletes in the country, despite accounting for more than 50 percent of the general population.

By 2023, the plan calls for women to account for 60 percent of the highly-competitive athletes, a goal that Chamroeun says will help the country have a shot at winning more medals as the Southeast Asian Games’ host country. Taekwondo and wrestling are two of the most popular sports for women in Cambodia, he adds.

In 2014, Sorn Seavmey became the first Cambodian — man or woman — to win a gold medal at the Asian Games. Seavmey, who won gold in taekwondo, is a role model and helping to attract girls to sports, said Chamroeun, who himself competed in wrestling in the 1996 Olympics and studied sports management in France.

Still, the head of the National Olympic Committee knows that not everyone will agree with the priority to focus on women, but he said modern society says women are equal to men. The initiative is being hailed by sports organizations and women’s rights advocates alike.

“This type of initiative shows our girls that making it on a professional level in sports is possible and even encouraged for females, whether on or off the field,” said Zoe Mandoux, a spokeswoman for SALT Academy,an organization based in Battambang that teachers girls how to play soccer. SALT leaders hope the focus on women in sports will also bring greater gender equality in Cambodian society in general, Mandoux added.

Anne Elizabeth Moore, an international journalist and author of several books on Cambodian young women’s rights, said that when she first started spending time in the country in 2007, she could hardly get any of the young women she knew to participate in any physical activity beyond using a hula hoop or taking part in an aerobics exercise class.

But, she said, as the nation has emerged from poverty, women have started taking up badminton and skateboarding; activities that are not only enjoyable, but also promote skills like agility, strength and teambuilding.

“Women’s participation in sports and other things that used to be considered leisure or middle-class activities is a sign that the nation’s developing, for sure, but the actual skills gained are going to ensure that that development happens in a healthy, sustainable, and thoughtful way. And that’s exciting,” she said.