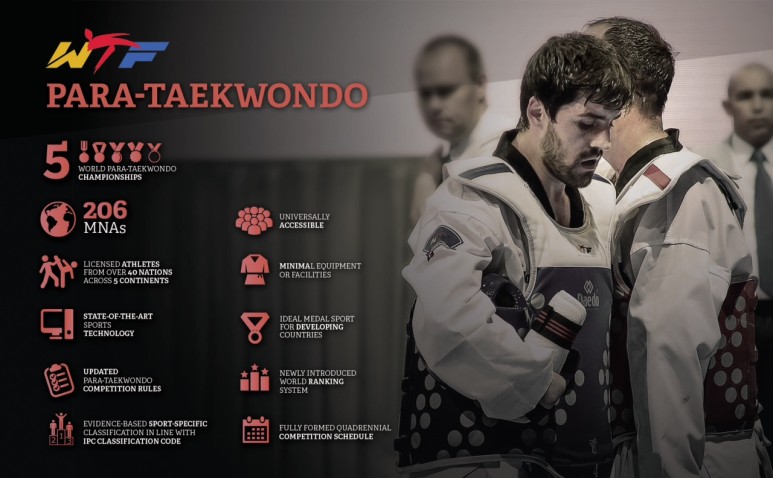 The World Taekwondo Federation (WTF) President Chungwon Choue today spoke of his confidence that Para-taekwondo would bring something special and distinctive to the IPC should the sport be given the honour of being included on the Tokyo 2020 Paralympic Games sports program.

The WTF President’s comments come on the day the WTF has announced that the sport’s flagship event – the World Para-Taekwondo Championships – will be held for the sixth time in 2015 in the Turkish city of Samsun on 18 September 2015.

With world rankings being implemented for all Para-taekwondo competitions this year, the Championships will carry a G8 world ranking and are expected to break the participation records set at last year’s record breaking event – which attracted 113athletes from 37 countries. Under the “One Taekwondo” philosophy, the Championships will also include Para-taekwondo poomsae competitions for intellectually disabled athletes and athletes with neurological impairments as part of the WTF’s commitment to developing para-sport.

As an IPC-recognised International Sports Federation, the WTF has worked closely with the IPC and the IOSDs to adopt international best practices and deliver the best possible sporting experience to athletes and fans. Over the last two years the WTF has:

“To see Para-taekwondo athletes compete at the Paralympic Games has been a dream of ours since 2006. Over the last six years, since our first World Championships, we have worked tirelessly to develop Para-taekwondo and provide the most fair, accessible and exciting sport possible. With the help of the IPC, we have come a very long way but we know we can go even further.

“With 206 national federations worldwide, we have huge potential for global growth especially in emerging markets and non-traditional sports nations. Para-taekwondo is universally accessible and already widely practised in all five IPC regions. If we had the honour of being included in the Paralympic programme, it would act as a catalyst for rapid expansion and provide a pathway into para-sport for people who would not otherwise have an opportunity to engage with the Paralympic Movement.

“We are committed to being an outstanding partner to the IPC. If selected, Para-taekwondo would be the only combat sport for arm-deficiency athletes on the Paralympic programme. It would be unlike any sport that Paralympic audiences have seen before and we strongly believe that it would add something unique and very powerful to the Paralympic Games.”

Para-taekwondo’s quadrennial programme has also been advanced to offer a clear pathway towards World Championships. This year will see the introduction of African and Asian Para-Taekwondo Championships for the first time giving athletes from all over the world the opportunity to compete in elite-level competitions. This will also help the WTF to meet the growing demand for the sport following a dramatic rise in global participation in 2014 with the number of newly registered athletes exceeding predictions by nearly 50 percent.

The IPC Governing Board will make their final decision on the Tokyo 2020 Paralympic Games sports programme at their meeting in Abu Dhabi, UAE, between 30 January and 1 February 2015.