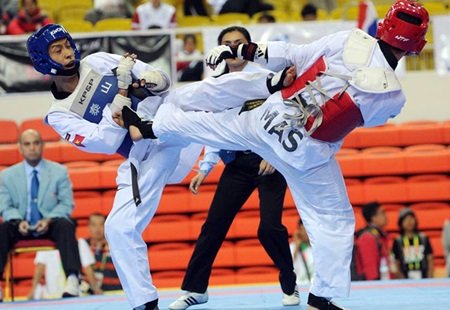 Chau, 28, said he will now coach the HCM City team.

The athlete belongs to the men’s 63kg category and was one of the three athletes from Viet Nam to win a gold medal at the last Southeast Asian (SEA) Games held in Myanmar.

He was expected to defend his title in June in Singapore and also perform well at the Summer Olympics in Brazil next year.

“I would have really wanted to compete for another SEA Games title before ending my career, but there are many things that have happened. I am getting old and do not feel strong enough to take part in elite competitions,” said Chau.

The London Olympian is a product of the Golden Athletes training programme. He is one of the best taekwondo fighters in the country and has won many medals in different competitions.

Chau won two bronze medals at the world championships held in 2011, a bronze at the Asian events in 2010 and 2012, in addition to winning many regional and national titles.

His absence will not only guarantee Viet Nam’s loss at this year’s SEA Games, but also push the country’s taekwondo sport into a crisis situation.

During recent years, the national team has seen many athletes quit the sport at their peak because of different reasons.

Chau’s retirement is not an exception.

SEA Games bronze medallist Chu Hoang Dieu Linh refused to experience further sporting glory after competing in the London Olympics. She was only 18 years old at the time.

World youth winner Hoang Ha Giang stopped competing at the age of 17 years in 2008 after she contracted the systemic lupus erythematosus disease.

“His decision to leave is a big problem for Viet Nam’s taekwondo, but we have to accept it. It is not an unusual, and has happened before,” former National Coach Ho Anh Tuan stated.

“During my term, at least 10 good athletes said goodbye, including my beloved fighter Chu Hoang Dieu Linh, who quit just one month after her first Olympics. She had worked really hard to attain world-class sports competitiveness.”

According to the coach, the reason for the sudden exits is that there is no suitable policy in place that helps athletes focus completely on sports.

“We are always worried about athletes in the 12th grade, especially about which sport they should follow, or which university they should apply to. If they choose a university, their future is wide open, but if they choose sports, they are made to undergo hard training and asked to participate in competitions for a meagre salary. None of the parents are happy or feel secure when their children express a wish to become professional athletes,” said Tuan.

“To understand why Viet Nam’s taekwondo team has fallen apart, we just need to compare our current efforts with our global standing in the past. We are now at mid-level, while two decades back, we were the leaders in the sport.” Tuan explained, adding that this is also why Viet Nam should not consider competing for an Olympic medal in Brazil next year.

“Olympic medals are incredible no matter how hard we try. A feasible and reliable target is to first win tickets to Brazil. However, I am not sure if we can make an impact like Tran Hieu Ngan did when she won a silver medal at the Sydney Olympics in 2000. We will not do well as the world is very different now,” he added.

“For the longest time, whenever an Olympics or Asian Games event was approaching, taekwondo was considered the key sport for Viet Nam. But in my experience, that was only the case till about a decade ago,” Minh said.

“It is easy to explain. The world has changed, but we still follow out-of-date training techniques. I myself saw our players do nothing, but only defend the diverse attacks from rivals during the Athens Olympics in 2004.

“The latter generation, including Chau, Thu and Linh were capable of winning medals, but they were left far behind by the world’s leading athletes,” Minh noted.

Both Minh and Tuan believe that it is time to rebuild the sport from scratch.

Truong Ngoc De, chairman of the Viet Nam Teakwondo Federation, said shortcomings still exist and there are many challenges, but there is still hope that the new plans will be executed better in 2015.

“The federation will also focus on training elite athletes to take part in international competitions, while coaches will be updated with new techniques, knowledge and regulations,” said De at a review conference on January 22.

“A plan to promote taekwondo among athletes will be implemented so that the sport can become stronger from 2015 onwards,” he added.

This year, taekwondo will figure during some tournaments, including the ASEAN championships in March, the 28th SEA Games in June, and the World Poomsae Championships in November.