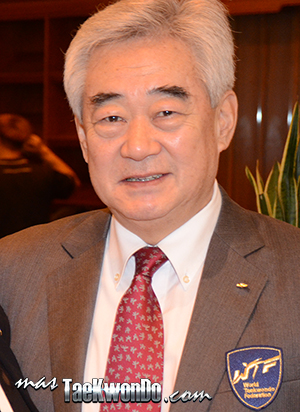 Below we, transcribe the entire Welcome Speech given to the 25 WTF Council Members who attended the meeting:

“The year 2014 has been a great year for the World Taekwondo Federation (WTF) for good reasons and the year ahead of us is shaping up to be an exciting one.

In 2014, we continued to work to grant our athletes more and better opportunities. Our World Taekwondo Grand Prix Series – giving athletes new opportunities in which to compete at the highest level, and even win a little prize money – matured, with tournaments taking place in Suzhou, China; Astana, Kazakhstan; and Manchester, Great Britain. The 2014 Grand Prix Final took place in Queretaro, Mexico.

Queretaro was the location for another event designed to raise the public profile of our athletes: the first-ever WTF Gala Awards Dinner. The same city was the setting for our World Cup Taekwondo Team Championships, which saw some tag-team battles that will go down in the annals of our sport as among the most exciting ever fought.

The WTF endorses universality, and working on the principle that in our sport, “No Athlete is Left Behind”, we have been energetically promoting Para-taekwondo. The 5th WTF World Para-Taekwondo Championships in Moscow, Russia were the best-ever.

In December 2014, the International Olympic Committee unanimously passed all 40 items that make up the Olympic 2020 Agenda. The WTF fully supports this roadmap for the future of the Olympic Movement.

The year ahead of us is shaping up to be another exciting one for the WTF.

In 2015, our top event will be the World Taekwondo Championships in Chelyabinsk, Russia in May. As this will be the biggest event prior to the Rio 2016 Olympics, I eagerly anticipate some spectacular action. The Championships will use the octagonal rings and the electronic headgear, which was first used at the Manchester Grand Prix Series in 2014.

We are also going all-out to place Para-taekwondo on the official programme of the 2020 Tokyo Paralympics. We will find out early in 2015 whether our application has been successful, so please cross your fingers. But regardless of that result, we are going to maintain our current dedicated focus on Para-taekwondo, ensuring that ever more disabled athletes get the opportunity to take part.

Now I think the time has come for a major paradigm shift in how the WTF oversees, administers and promotes taekwondo.

After taking office in 2004, I had two chief aims. The first was to ensure fairness and transparency in referring, judging and administration. The second was to ensure that taekwondo was as exciting and dynamic as possible. I think it is fair to say that we are almost there on both counts.

This means making our events more media-friendly and upgrading marketing and promotion to lure the crowds. And this means giving our elite athletes the exposure they deserve, by helping them become taekwondo stars. In this regard, we will further activate our tag-team matches.

To be sure, this directional shift is going to require different mindsets to those the WTF has employed thus far; this new goal represents a towering challenge. To achieve it, the WTF leadership hopes to leverage the full support of the global taekwondo family.

I wish all members of the WTF family a successful and prosperous 2015″.

Dr. Choue: “We want a more marketable and accessible Taekwondo for all”

Source:  Inside the Rings