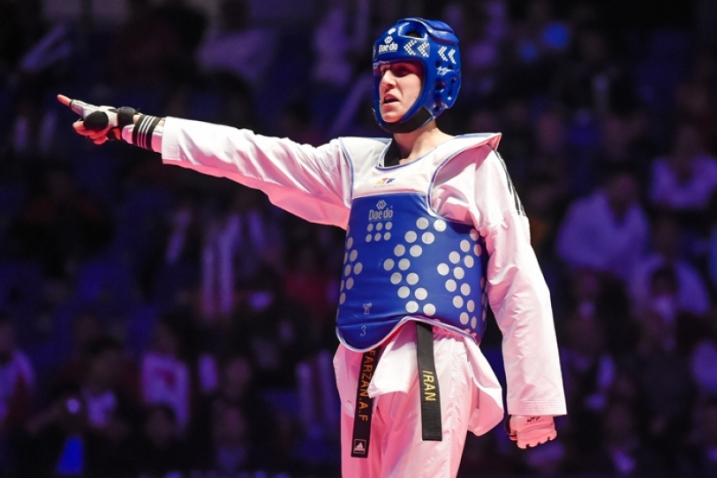 In the final bout of the men’s -58kg category on Dec. 3, 2014 in an event that is considered the pinnacle of elite taekwondo, the gold medal was won by an Iranian who can boast skill and talent in spades – but is a mere lad who is not only still at high school, but as a 4th poom, does not even hold a black belt.

Having cruised through to the semifinals in the men’s -58kg category, Farzan Ashour Zadeh Fallah undertook what can only be described as a demolition of Korea’s Tae-mun Cha in the gold-medal showdown.

In the first round, the Iranian’s arcing high kick took the charging Cha by surprise. In the second round, he added to his score with sniper-like kick placemen.  By the third round, Cha, one of Korea’s brightest taekwondo stars, was looking wild as the Iranian maintained his cool and extended his lead. The one-sided battle was only halted after Ashour Zadeh Fallah had racked up a colossal 12-point difference – with a remarkable 49 seconds still remaining on the clock.

Watching the Iranian do his think, one is reminded of a saying attributed to ancient Chinese military philosopher Sun Tzu. His attacks are like water: They flow through and around his opponent’s defense from unusual angles that are so craftily chosen that they often do not register on his peripheral vision. Appropriately,  Ashour Zadeh Fallah’s nickname, coined by an awed TV reporter, is “Tsunami,” for on the field of play, the youthful Iranian has the unstoppable force of a tidal wave.

Despite his soaring ambition and remarkable talent, off the mats “The Tsunami” is menacing neither to look at nor to listen to: The laid-back teenager is tall and gangly, softly spoken and polite.

But regardless of his laid-back persona, he is very self-assured – very. For example, he had no doubt about the end result against Cha.

“This year I won most of my fights with a 12-point difference,” he said.” So I was sure I would go in and win.” In his post-fight analysis, he clinically dissected Cha’s weaknesses: “He was not very fast, and his body was open.”

He admits to having analyzed Cha’s style in in-depth video sessions with his coach in the run-up to Queretaro, and there can be no doubt of his physical skills, but even these assets do not explain his ice-cold in-fight composure.  So what is the secret to his head game: Mind training? Prayer? Meditation?

None of the above, apparently.

“For me, what is very important is the mental fight, not the body fight, I am always cool,” he said. “I have all the stress and difficult situations in the mind, but even when I go out in my free time, I focus – there is no special technique.”

A native of Mazandaran, Iran, the real secret to his success is not just personal talent, but his home nation.

Perhaps more than any other nation, Iran, with its league of 127 teams fielding 16,000 athletes, all served by a network of dedicated training facilities, is a “champion factory” for taekwondo athletes. That makes “The Tsunami” the latest precision-engineered product to roll off the assembly line.

“In Iran the training is very hard, all the teams are training hard,” he said. As regards personal training, he takes two rest days a week. His conditioning focuses on bodybuilding for strength (his tall, thin frame looks deceptively fragile); plyometrics for explosiveness; and of course running: long distance for overall endurance and sprint work in the run-up to competitions.

He got his start taekwondo at the age of six and made it onto the junior national team at the age of 12. The year 2014 – Ashour Zadeh Fallah’s 18th year –  has seen him reach maturity as both a man and an athlete.  In addition to his Queretaro first- place finish, he struck gold at both the Manchester Grand Prix and the Incheon Asian Games.

Asked about his future plans in the sport, he is not modest: He hopes to win more medals than any other taekwondo fighter, he said.

Is this the youthful dream of a teenager or a realistic hope?

“If he continues working, he can realize his ambition,” said Seyyed Mohammad Pouladgar, the president of the Iranian Taekwondo Federation and a man who knows a thing or two about incubating brilliant fighters. “The short goal is the Olympic gold – after that, it is just the beginning!”

After graduating from high school, the 18-year old plans to study physical education at university. In his down time, Ashour Zadeh Fallah likes to hang out with friends and travel with his family.

Beyond taekwondo, his only other hobby is swimming –  an appropriate activity for a fighter who, for years to come, looks likely to surge across the taekwondo world with the force of the tidal wave for which he is nicknamed.