With welcoming words Dai Won Moon, Juan Manuel Lopez and Jin Yang Bang opened the meeting.  The first to speak was Philippe Bouedo, Director of the WTF Games Committee. “Among the important things to highlight is that each coach will be allowed to appeal one time.  In case the coach has lost his right to appeal, he will be given one more chance to appeal during the Final and the combat for the third place.”

They also informed that the official list of competitors changed as, due to technical errors, they forgot to add ranking point to some athletes, consequently the positions in the ranking changed.  “Athlete Wu Jingyu, -49 kg from China will not compete due to last minute medical problems.  That is why Brazil, No. 9, will take her place.” He continued Bouedo.

The Drawing of Lots  will be provided tomorrow after all the athletes compete the corresponding weighing.

Chakir Chelbat, Chairman of the WTF Referee Committee informed that Daedo will be used and Darthfish will provide the video replay service with with 4 cameras.

“This time we will not give a card to request a video replay, instead we will give you a box with a microphone.  When you need a video replay you will push a button and the microphone will be automatically open.  An audio signal will be sent to the central referee.  If the request is accepted, a circle will be displayed, if not accepted an X will be displayed”, informed Chelbat to the coaches who attended the meeting. 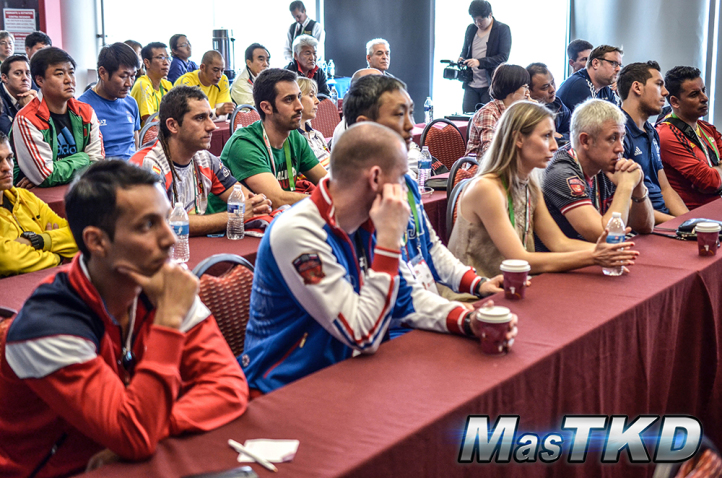