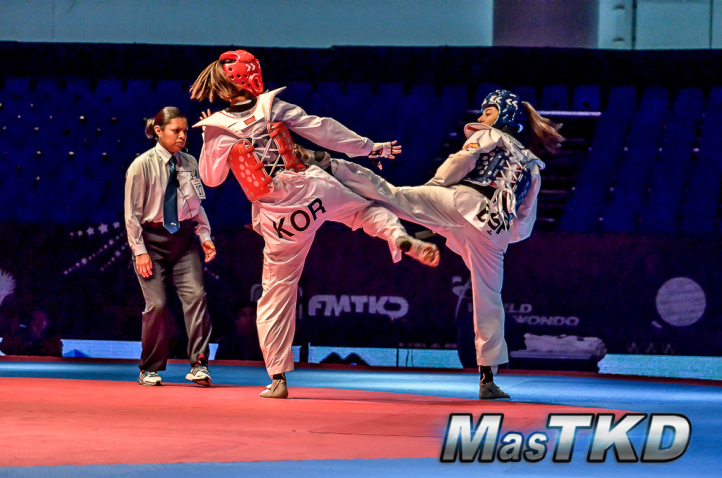 Spain took home two silvers and Mexico and Uzbekistan grabbed one each, while bronzes went to Japan, France and Iran, which won two.

In the female -57kg category, Great Britain’s Jade Jones broke a jinx that has haunted her throughout  one of the great rivalries in the sport: In three previous Grand Prix, she had lost in the final match to Spain’s Eva Calvo Gomez. This time, from the opening bell, Jones came out aggressively, putting heavy forward pressure on the Spaniard and scoring with two high kicks – confirmed only after two video replays – that shaved her opponent’s headgear. Final score was 7-3, with a long-awaited gold for Jones and silver for Calvo Gomez.

Asked how she had overcome her long-time nemesis, Jones called it “an amazing experience,” adding that it had been a mental game. How about those two close-shave head kicks? “I thought I had scored, and the Mexican crowd really helped me each time I put in an appeal.“

In the bronze-medal match in the category, Japan’s Mayu Hamada maneuvered her opponent  Hedaya Malak of Egypt to the edge of the ring with footwork and unleashed a barrage of kicks in the second round, racking up the points. She maintained her dominance to the end, winning 8-2.

In probably the most exciting match of the finals, Russian Alexey Denisenko did furious battle with Spain’s Joel Gonzalez Bonilla for gold in the male -68 kg category. The match was a flurry of flying feet as both men unleashed high and spinning kicks, with the Russian taking to the sky in a series of airborne assaults. Denisenko’s aggressive tactics seized him an early lead, and he held off a late challenge from Gonzalez Bonilla to take the gold, 9-5.

Asked what had been behind his spectacular display, Denisenko said he had seen his opponent’s surprise when he first made head contact, “So I used all these techniques.”

It had been a disappointing tourney for one of the sport’s star athletes, Servet Tazegul of Turkey: due to injury, he did not appear on the competition floor, leaving Iran’s Behnam Asbaghikhanghah to pick up the bronze in the men’s -68 kg.

The female +67 category saw the roof almost lifted off the Queretaro Convention Center as the excitable Mexican crowd roared and clashed thunder sticks in support of local favorite Maria Espinoza,  squaring off against the Netherlands’  Reshmie Oogink. But an unfazed Oogink had come to fight and racked up an early lead; the Mexican returned fire with her famed counterpunch. By the third round, the Dutch fighter was still ahead and although Espinoza let fly with a flurry of desperate spinning back kicks in the dying moments of the third round, Oogink kept her cool and kept ahead, taking the gold with a score of 4-2.

“I feel great!” said Oogink. “What could be better than winning gold?”  Asked if she had been intimidated by Espinoza’s thunderous support, she said, “I knew she would have the crowd behind her … I focused on my game.”

For bronze in the female + 67kg category, Anne-Caroline Graffe of France seized victory from the jaws of defeat: Having been behind for almost the entire match, she came back with a flurry of techniques in the closing seconds to beat out Korea’s In-jong Lee, 5-4, for the bronze.

In the male +80kg, Korea’s Dong-min Cha overcame an early lead that Jasur Baykuziyev of Uzbekistan had established in the first round, evening up the score with a fast series of dual-footed attacks in round two. In a furious fighting finish on the perimeter of the mats in the third round, Cha took the match with a score of 6-5,  granting the sport’s homeland its only gold of the tournament.

Cha said it had been a “hard fight,” admitting that, as the last Korean gold medal hope of the Grand Prix, the stress had been piled on: “Actually, I felt a lot of pressure – the mood in the Korean team had not been high.”

In the male +80kg, Iran’s Sajjad Mardani won bronze when Stephen Lambdin of the USA was unable to compete due to injuries sustained in earlier bouts.

“We founded the Grand Prix in December 2013 in Manchester, and I think UK people are real sports-loving people, so the first Grand Prix was very successful,” said WTF President Chungwon Choue. “Then in December this year we have had a Grand Prix Final with big surprises in many weight categories here in Mexico –  a wonderful taekwondo-loving country.”

Choue added that the Grand Prix series would restart in August 2015 in Moscow, with the year’s final fixture likely to take place in Mexico City.

And Queretaro is not quite finished with taekwondo for this year. The central Mexican city hosts the WTF’s inaugural Gala Awards Dinner tomorrow (Dec. 5), followed by the 2014 World Cup Taekwondo Team Championships at the same venue on Dec. 6-7. 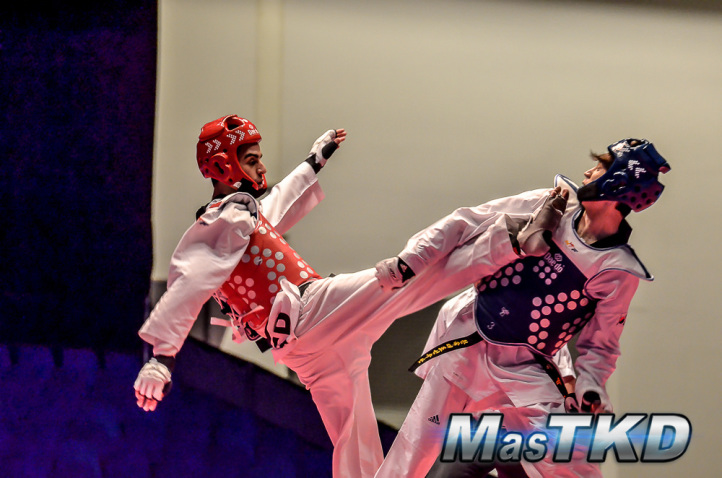