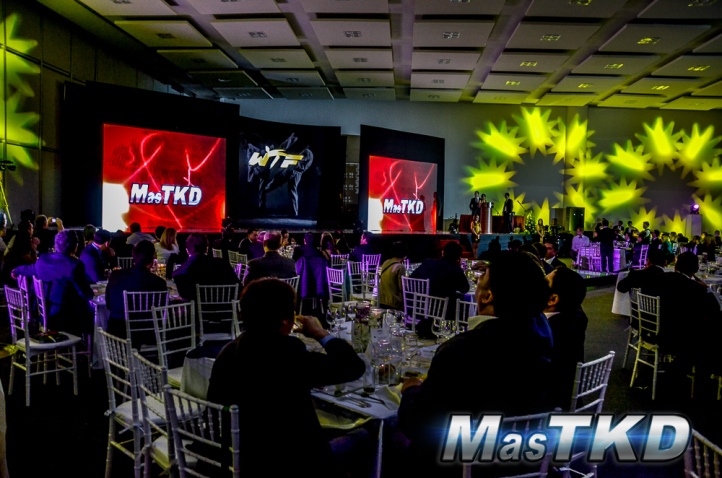 At an inaugural gala awards dinner held in a convention center perched on a mountain overlooking this scenic, central Mexican city, the World Taekwondo Federation named Dae-hoon Lee of Korea and Jade Jones of Great Britain its athletes of the year.

“Thank you very much, I am very happy to stand here,” Lee said in his acceptance speech. “I will keep doing my best. Muchas gracias!”

Jade Jones, 2012 Olympic gold medalist in -57kg, three-time runner-up and one-time Grand Prix winner in Queretaro, Mexico, was named “the 2014 WTF Female Player of the Year” with 29 out of 105 votes cast.

“I am really honored to accept this award,” she said after receiving the award. “Special thanks to G.B. Taekwondo and my amazing coach, Paul Green.”

Jones had previously been awarded a prestigious MBE (“Member of the British Empire”) by the British Government in 2013. 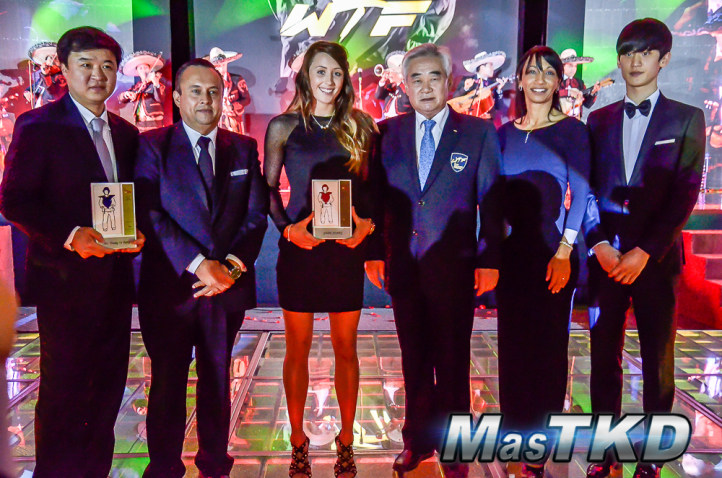 The “2014 WTF Coach of the Year” honors went to Korean Young-in Bang, who has served as the head coach of the Mexican national team since 1998, with 16 out of 59 votes cast. “I am from Korea, but I will speak Spanish because I live in Mexico,” he said at the podium. “I want to thank my friends and students and everybody in this place. Long live Mexico!”

The athletes and coaches were voted for by dinner attendees, while the 2014 WTF National Association and the 2014 WTF Referee of the Year were chosen by a five-member Nomination Committee.

Those eligible to vote for the awardees were all participating 64 players, 30 international referees and 27 national federations, which attended the Grand Prix Final, as well as registered journalists covering the event, one vote per country.

The “2014 WTF National Association of the Year” award went to the event’s host, Mexico.

The “2014 WTF Referee of the Year” award went to Neydis Tavarez of Puerto Rico, whose refereeing duties had included officiating the taekwondo events at the 2012 London Olympic Games.

The red carpet dinner took place in a candlelit convention hall ballroom, illuminated with a giant WTF logo. The sport’s elite athletes – gathered here for the 2014 WTF World Taekwondo Grand Prix Final, held over the previous two days, and the 2014 WTF World Cup Taekwondo Team Championships, to be held over the following two days – were attired, not in their usual workout gear, but in a formal garb.

The diners were greeted by hosts in traditional Mexican costumes and entertained by Mariachi bands and the WTF Taekwondo Demonstration Team.

The WTF Gala Awards Dinner was designed to grant long-overdue recognition to athletes engaged an activity that is on the Olympic program and is one of the most popular participation sports in existence – it boasts 80 million practitioners and 206 member national associations worldwide.

“This is the first time for the WTF to recognize our top athletes,  coaches and member national associations,” said WTF President Chungwon Choue. “We just celebrated the 40th anniversary of the WTF last year – this has taken us 40 years!”

The gala awards dinner was the brain child of Juan Manuel Lopez Delgado, president of the Mexican Taekwondo Federation, who was presented with a plaque of appreciation by Choue. 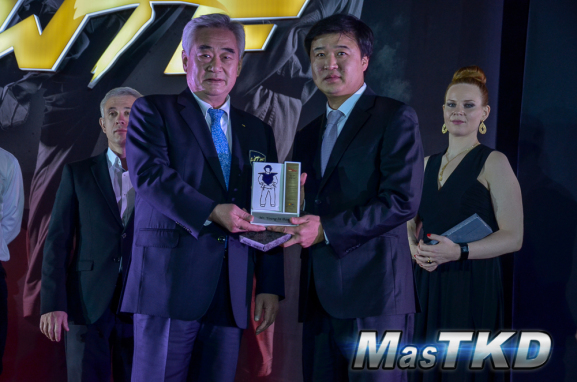 Choue added that this was “only the beginning and next year the event would be bigger and more formal at 2015’s Grand Prix Final in Mexico City.”

The athletes were all in favor of the event.

“It’s a step in the right direction,” said Jones. “It is exciting to have this sort of stuff – and with the Grand Prix series coming along, taekwondo is starting to get bigger, more professional and more exciting to watch.”