Spain, Korea , France and Iran took home one silver medal each, while the bronze went to France, Korea, Russia and Argentina each.

The World Taekwondo Grand Prix events bring together top-seeded global talents in the sport in four male and four female Olympic weight categories. The prestigious Queretaro Grand Prix final, which continues until Dec. 4, has seen 64 athletes from 27 countries in contention.

In the female -49 kg final match, Brigida Yague of Spain squared off against Lucija Zaninovic of Croatia. Both fighters displayed a conservative style, interspersed with sudden flurries of kick and counter-kick. Yague grabbed and maintained an early lead, utilizing her jackhammer lead-leg side kick to impressive effect, before Zaninovic clawed back points in the last seconds, for 7-7. In a golden point showdown, Zaninovic counter-kicked her way to the gold.

“It’s wonderful!” said Zaninovic at the medal ceremony. “ I had been losing the match until the end, then I found my courage – and because of that, I am very happy!” 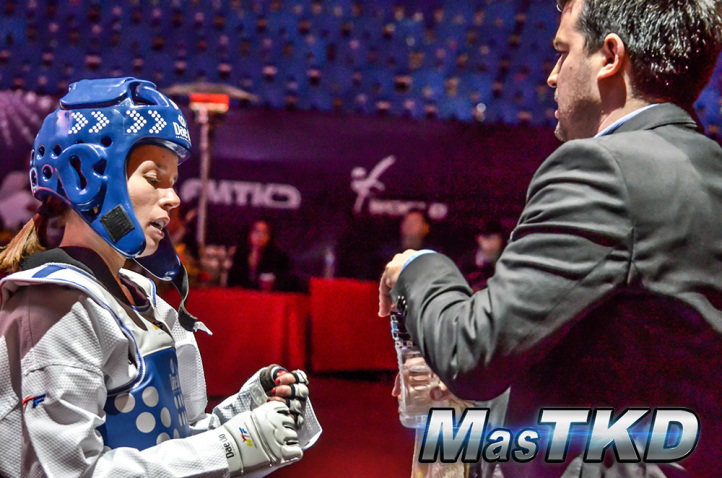 In the same category’s bronze-medal contest, Yasmina Aziez of France edged out Thailand’s Chanatip Sonkham, 7-5, for the bronze.

The male -58kg final match saw Farzan Ashour Zadeh Fallah of Iran take on Korea’s Tae-moon Cha.  In the first round, the Iranian’s arching high kick took the charging Cha by surprise. In the second round, he added to his score with sniper-like kick placemen. By the third round, Cha was looking wild while the Iranian kept his cool and extended his lead, winning gold 15-3 on a 12-point difference – with 49 seconds still on the clock in what can only be described as a masterly display.

“I am so happy,” said Ashour Zadeh Fallah after receiving his medal. Asked how he had maintained his composure under fire, he replied simply, “I trained with a very good coach.”

For the bronze, Korea’s Tae-hun Kim, the world number one in the category, defeated Levent  Tuncat of Germany 13-7 in a fast and furious match that featured an exhausting work rate from both players

In the female -67 category, Haby Niare of France, the world number one, went toe-to-toe with Sweden’s Elin Johansson.  Niare had, throughout the day, shown remarkable fluidity in her kicks, able to score at seemingly impossible angles, while the Swede fought with a more textbook style. But Niare just could not seem to connect, and Johansson triumphed 4-3.

“I had three very tough fights against three very tough opponents, so I could not be happier – this is one of the happiest days of my life,” said Johansson. “I was very tired at the end, but I kept control of the fight – I did my style.”

Russia’s Anastasiia Baryshnikova overpowered Chinese Taipei’s Chia Chia Chuang in the bronze-medal bout that was a showcase of clean kicking technique, winning the bronze with a score of 9-5.

The male -80kg final match was a battle between Iran’s Mahdi Khodabakhshi and Russia’s Albert Gaun. Khodabakhshi displayed the customary coolness and precision of the Iranian elite, wielding an almost leisurely lead leg side kick, while Gaun launched a series of lightning front-foot turning kicks; he may possess one of the fastest right legs in sport. Yet the first two rounds were scoreless.  With everything to play for, the third round got off to a scorching start then settled back down to physical chess – before Gaun scored with his turning kick in the final seconds, winning 1-0. Delighted, the Russian performed an impromptu dance on the field of play.

“I am feeling good, it is not every day you win a Grand Prix!” Gaun said, adding with a dose of modesty, “There was no strategy in this, it was just a fight – and I got lucky.”

In the bronze bout, Sebastian Crismanich of Argentina – who had eliminated the world number one, Aaron Cook of the Isle of Man, in his first fight – applied a full arsenal of kicks to defeat Mexico’s Uriel Adriano 6-5, despite the vocal crowd clashing thunder sticks in support of the home-team player. 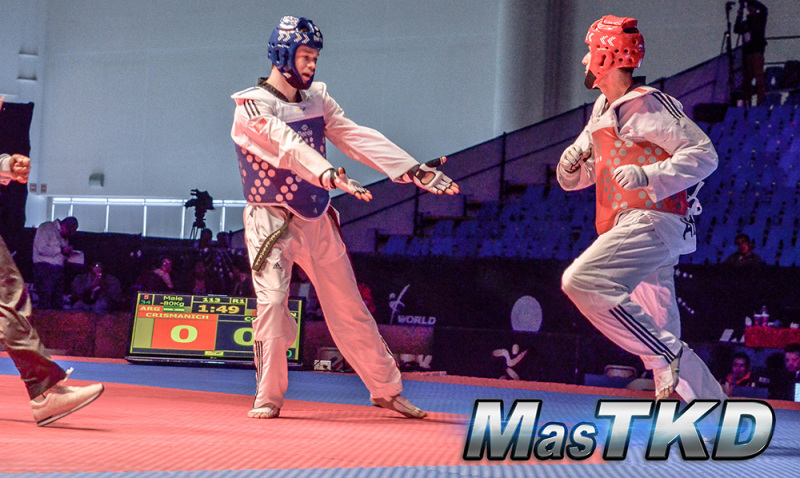 The Grand Prix Final was a battle for both sporting glory and cash prizes. With rankings being built into the competition, the Grand Prix is a key landmark for athletes on the road to Rio 2016. Medalists also walk away with cash: gold winners will be U.S.$6000 richer, silver medalists take home U.S.$3000 and bronze winners get U.S.$ 1000.

The venue was the Queretaro Convention Center, perched on hills above the scenic city noted for its historic center. Matches took place on one elevated octagonal field of play, overhung with four electronic displays relaying the action live, as well as slow-motion replays of key match moments during the intervals.

Shortly before the bronze-medal contests, there were performances by a local gymnastics troupe and the WTF Taekwondo Demonstration Team, which showcased their usual spectacular martial moves, kicks, breaks and flips, as well as some Michael Jackson dance moves and a bespoke Mexican piece done to the tune of ”La Bamba.”

A vocal home crowd, matched by a noisy Russian contingent, enlivened the ambience, while the ring and electronic equipment had been modified to maximize the action of the GP.

“The Octagonal field of play is not just a gimmick, it means players cannot edge back because the corners have been cut off,” said Mike McKenzie, the WTF TV commentator.  “This means more lateral footwork and more opportunities for contact.”

The addition of electronic sensors in players’ head gear sped up matches by obviating appeals for head kicks – the second time this systems has been used in a Grand Prix.

The Grand Prix finishes Thursday, and will be followed by a Gala Awards Dinner on Friday, an inaugural event designed to grant recognition to the top athletes in the sport.