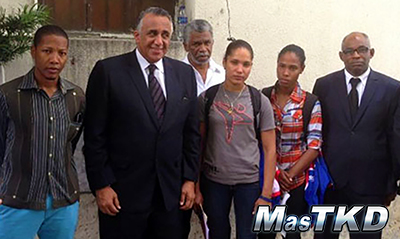 Taekwondo athletes Gabriel Mercedes, Disnanci Polanco and Yahaira Peguero settled their legal differences through a settlement agreement whereby Olympic medalist laid aside his accusations against his two teammates, whom he would have identified as responsible for having thrown “acid “to his car.

The reconciliation was achieved through the mediation of the Dominican Olympic Committee president, Luis Mejia Oviedo, and signed before the deputy prosecutor Carlos Calcaño, who in charge of the case.

“The case was settled in the afternoon with our participation;  the two parties discussed the issues and reach a reconciliation which clearly established that the case was closed and settled on the basis of existing charges,” said Mejia Oviedo.

He also informed that the innocence of athletes Disnansi Polanco and Yahaira Peguero, two prominent members of the women’s taekwondo team  who were participating in the Veracruz Pan American Games, was determined.

Both athletes are supported and backed by the Dominican Taekwondo Federation.  Danny Rojas, coach of the Dominican National Team, signed a legal statement where he confirms that Polanco and Peguero were at in a training session at the time and day when the incident of Mercedes´ car happened.

Among the agreements signed by the parties was also included not make any public statements in order of not add any unnecessary noise that could disrupt the settlement reached.

One thought on “Dominican athletes, innocent”