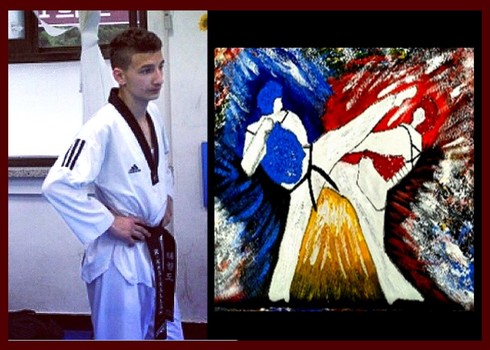 Having started his training in Taekwondo at the age of four, Roberto Valentino of Lebanon currently holds the rank of 2nd degree black belt and continues forward under the direction of his coach, Master Mark Rjeily. At 15 years of age, Roberto shares his dedication of the martial art through hisTaekwondo paintings , colorfully expressing quite literally, the art of Taekwondo.

Roberto has already reached many accomplishments within the style as having received the Youth Excellence Award in the Taekwondo Hall of Fame 2011 at the Kukkiwon in Seoul. He was also a two-time participant in the Taekwondo training camp at the Kyunghee University in Korea and often visits legendary Taekwondo Grand Master Kang Shin-Chul .

He is quick to offer his excitement at meeting Grand Master Kang at the Moo Duk Kwan Namchang Dojang in Suwon, of which GM Kang is director and having the opportunity to display his artwork and share his hopes and dreams for the future:

“Taekwondo is my life”, he told me, “and it will always be a driving force in my life. I hope to become an architect and exhibit my work worldwide.”

From his home in Lebanon, Roberto shares his skill with so many around the world through social media such as his Taekwondo paintings via Tumblr  and his hopes to broaden his boundaries beyond his tiny country by discovering new friends from all across the world by way of Twitter .

Instead of selling his artwork, Roberto prefers to donate them to charity instead. He has donated his paintings to the World Taekwondo Federation  in Samseong-dong, Gangnam-gu, Seoul, South Korea and participates in numerous charity events such as the Saint Jude Lebanon  and theCelebration of Life Charity  in Dubai: 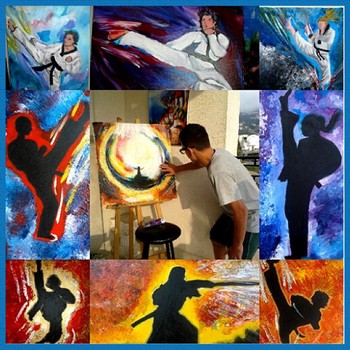 “Taekwondo has taught me to see life in a positive way. The fighting spirit of Taekwondo gives a lot of power and self confidence that makes me want to help and support others when I can because it’s a culture for humanity. Through my paintings, I promote Taekwondo hoping that people will appreciate it and be part of it.”

The principles of Taekwondo are a universal foundation for a brotherhood among practitioners across all boundaries. It is a brotherhood that stretches across all continents, leading us striving to not only become the best we can be in the art, but as better human beings as well.

As a young teenager, Roberto has found his way in life through Taekwondo which he notes is very popular in Lebanon. He is part of the brotherhood. Through his paintings, he strives to share peace to all of those he may reach and to bring hope to others through his paintings.

“I am an artist”, he tells me in closing, “and I dedicate my work to charity and to promoting peace and Taekwondo.”

From his homeland of Lebanon, Roberto lives his life as any other teen: hanging out with his friends and always quick to tell anyone willing to ask: “I love art, I love Taekwondo, I love Rock, I love my life.”

With his unique style of bright, acrylic strokes of colors, young Roberto Valentino has given a new meaning to the phrase: Art of Taekwondo.