Kuwait’s Taekwondo National team won the GCC 5th Taekwondo Championship and the first Poomsae competition for men and women, attaining the first place with three gold medals and four silver ones, while the second place went to Saudi Arabia and third to Bahrain, the host country. 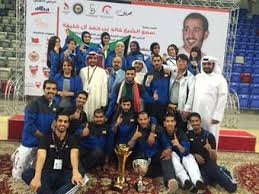 This significant achievement by Kuwaiti youngsters is an extension to their previous accomplishment when they won the 4th championship in Doha two years ago, Hani Al-Mershad, a member in the Board of Directors of Kuwait Taekwondo Federation told Kuwait News Agency on Sunday, adding that the team won three medals in the Kyorugi competitions, and first place in Poomsae competitions.

Al-Mershad dedicated the Championship’s Cup to His Highness the Amir Sheikh Sabah Al-Ahmad Al-Jaber Al-Sabah, the Kuwaiti people, the Kuwaiti athletic society, and Kuwait Taekwondo Federation’s Board of Directors for their significant efforts in preparing the players for this tournament.