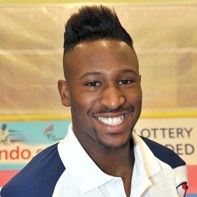 The Tamworth fighter is named for this new event in an eight-man squad including Commonwealth and French Open gold medallist, Damon Sansum.

Deer doesn’t attract the same headlines as some of his GB Taekwondo training partners but has regularly featured at the business end of tournaments during 2014.

A bronze medal from the European Championship in Azerbaijan-host country for next year’s inaugural European Games- sits neatly alongside his recent Commonwealth title from Edinburgh. Deer, 27, also delivered podium finishes in Egypt and the United Arab Emirates.

“I would liked to have changed the colour of some of the medals I have won,” he admits. “But my perfornances have been good and I am happy.

“I am already looking forward to next year’s World Championships. Winning the Commonwealth title was great,” confirmed Deer who struck gold with victory over experienced Canadian, Eloi Paradis-Deschenes.

“But it was also good because the things I had practiced in training came off. So, it was win-win.

“I am going into this weekend with the same mindset and the same plan. It’s a new G1 (ranking) tournament so we are all excited about going out there.

“There will be abundance of -74kg players over there so it will be good for me to go and test the waters against them.

“After winning the Commonwealth title I’m looking to get a further 10 ranking points and finish on a high. I have had a good year. I am happy where my performances are going. I just need to keep pushing.”