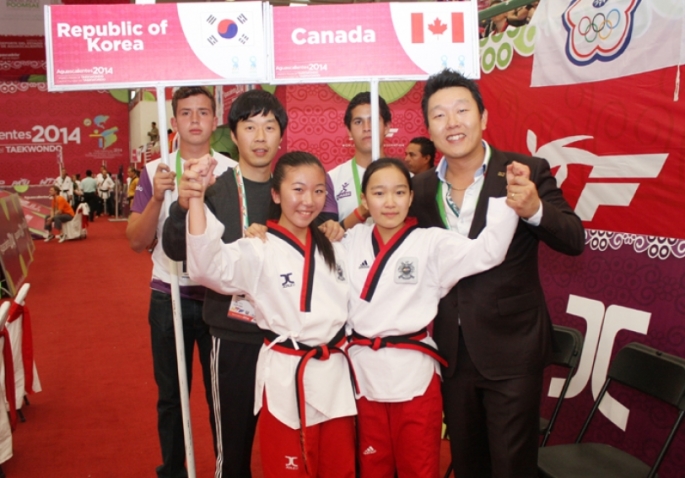 On the first day of competition, which was held at the Olympic Gymnasium with nine gold medals up for grabs, Korea won three gold medals, while host Mexico, Vietnam, the United States, the Philippines, Turkey and China took home one gold medal each.

A total of 461 poomsae athletes from 46 countries compete for top honors in 36 categories, including eight for freestyle poomsae. Fifty international poomsae referees officiate at the championships.

In the female team under 30 division, a trio of Vietnamese took home the gold medal, while Chinese Taipei won the silver medal. The bronze went to the United States and Turkey.

In the male team over 30 category, the Philippines took home the gold medal, while the United States took the silver. The bronze went to Mexico and Turkey.

In the male individual under 60 division, Korea’s Hyung-jun Noh won the gold medal, while host Mexico’s Oscar Mendiola Cruz won the silver. Turkey’s Teyfik Celik and the Netherlands’ Ata Alavi had to settle for the bronze medal.

In the male individual under 50 category, Turkey’s Mustafa Yilmaz took home the gold medal, while Korea’s Hyeon-ju Oh won the silver. Germany’s Michael Bussmann and Mexico’s Salvador Carrillo had to settle for the bronze medal.

In the pair under 30 division, a pair of Mexicans earned their country the gold medal, while Chinese Taipei took the silver. Vietnam and the United States shared the bronze medal.

An opening ceremony of the championships was held at the venue at 7 p.m., drawing WTF President Chungwon Choue, Carlos Lozano de la Torre, governor of the Aguascalientes state, and Juan Manuel Lopez Delgado, president of the Mexican Taekwondo Federation.

In his congratulatory message during the opening ceremony, WTF President Choue said, “Since its inauguration, the WTF World Taekwondo Poomsae Championships have been held every year with significant growth in the number of participants and quality of performances.”

“Especially, newly introduced freestyle poomsae showcased the artistic aspects of taekwondo. I hope that more dynamic performances will be displayed at this Championship,” Choue said. “I have full confidence in organizing the best World Poomsae Championships ever because we are in Mexico – the country that people love taekwondo.”

On the second day of the competition on Oct. 31, poomsae athletes will compete for top honors in nine divisions.