Iran’s Farzan Ashour Zadeh Fallah needed a fourth golden-point round to win the gold medal in the men’s -58kg category. Tied at 3-3 at the end of the third round, the Iranian scored the winning point against China’s Shuai Zhao in the golden-point round for the top honors.

In the male division, Portugal’s Rui Braganca and Mexico’s Cesar Rodriguez had to settle for the bronze medal.

In the men’s -80kg category, Iran’s Mahdi Khodabakhshi brushed aside a stiff challenge from the Isle of Man’s Aaron Cook to win the final match 13-11 for the gold medal. In the male category, the bronze went to Iran’s Masoud Hajizavareh and Germany’s Tahir Guelec. 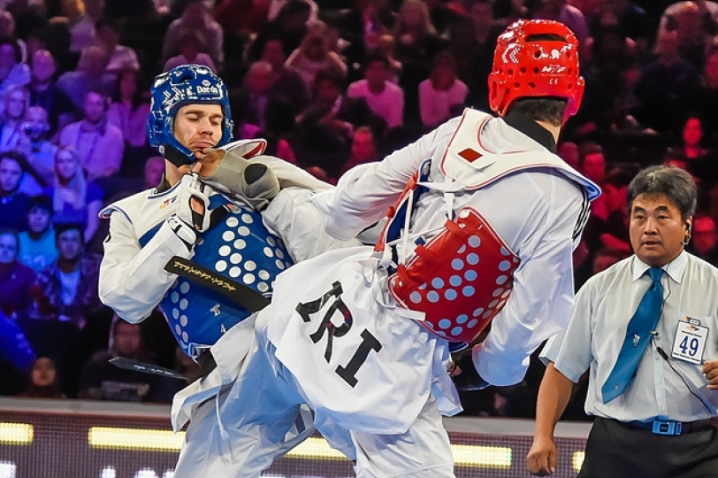 Cook advanced to the final match as he won a semifinal match against Germany’s Guelec with a referee-stop-contest (RSC) victory in the first round. With 42 seconds remaining in the opening round, Cook, who was behind 4-0, made a successful left-foot turning kick to the face of the German to even the score at 4-4. Cook’s powerful kick sent his opponent to the mat floor and forced the center referee to stop the contest.

A total of 236 athletes from 56 countries are competing at the Manchester Central Convention Complex for top honors in the Manchester Grand Prix event, which continues until Oct. 26.

In the afternoon, there were a reception and an opening ceremony of the 2014 Manchester Grand Prix event at the venue, with the attendance of WTF President Chungwon Choue and Adrian Tranter, president of British Taekwondo.

The third and final day of the competition, on Oct. 26, will feature two weight divisions: the women’s -57kg and the men’s -68kg.