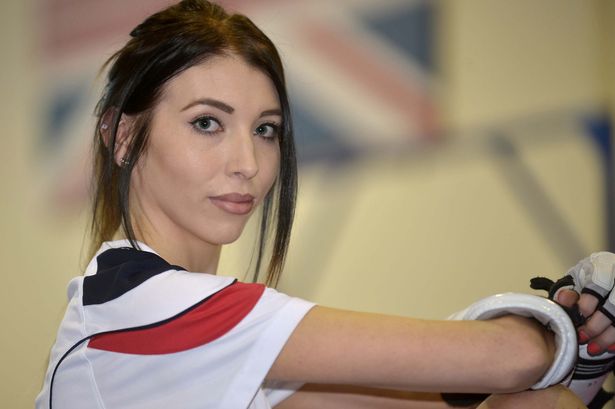 Super-tall Olympic hopeful Jade Slavin is having the last laugh on school bullies who made cruel jibes about her height.  And classmates would risk a kicking now if they still teased striking Jade over her stature.

But there is more to the 6ft 2ins Rio 2016 prospect than first meets the eye.

University graduate Jade, 21, has mixed brawn, brains and beauty to become one of Britain’s best exponents of the ancient Korean martial art of taekwondo as well as an aspiring model and beauty queen.

However, high kicking Jade’s long legs will be seeing less of the catwalk and more of the world’s taekwondo mats as she chases her Olympic dream for the next 18 months.

After just four months as a full-time member of the GB Academy on Ten Acres Lane, she has been selected for next weekend’s prestigious World Grand Prix at Manchester Central featuring 256 of the planet’s best kickers and punchers.

Jade said: “It was hard at school and I used to get bullied a few times for being tall and skinny”.

“I wasn’t badly bullied and it was more verbal abuse”.

“But that’s one of the reasons I got into taekwondo because my dad thought it would be a good idea to learn how to defend myself”.

“A friend of my dad’s friends did it and one day I bumped in to him and he had his taekwondo suit (dobok) on”.

“I was like ‘dad, what is he doing? Why he is he wearing that suit?’ Dad just said he does taekwondo, like the Bruce Lee films. I just wanted to have a go straight away and I loved it.”

Jade, who became national champion in Manchester last month, took up the sport at nine.

A few years later, and still growing, she started her next career pathway.

She said: “I began modelling when I was 11, sending photos to agencies, but it wasn’t until I was about 16 when things started to roll”.

“I got asked to do modelling for Atos, the clothing website, and other fashion shows”.

“I am signed up to Maverick Models but I really haven’t done too much work yet. I want to focus on my taekwondo, plus the castings are usually during the week when I have training.”

She said: “I started modelling to boost my confidence and prove people wrong. Hopefully, I am doing that now”.

Jade had just completed a three-year sports science degree at Northumbria University when the call came fort her to move to Manchester to join the GB Academy.

She said: “I was excited and surprised when I was told because I thought I was too old as most of the girls are 18 or 19″.

“I did have trials when I was 16 but the last stage and boot camp were on at the same time as my exams”.

“I did my exams instead and didn’t think I would get another chance to prove myself. But I am here now”.

“I’ve finished my studies and while I still have my modelling to fall back on, my main goal is taekwondo and trying to focus on Rio 2016”.