India did not have the best of outing in taekwondo competitions on the 12th day of the 17th Asian Games with Aarti Khakal and Rajan Pandia Anand crashing out in their respective events, in Incheon on Wednesday.

While Aarti lost 8-15 to Ganiya Alzak of Kazakhstan in the round of 32 encounter of women’s 57kg category, Anand was shown the door by Yonghyun Park of Korea 1-7 in the round of 16 of the men’s 80kg category at the Ganghwa Dolmens Gymnasium.

In the women’s 57kg category, Aarti started her contest on a bright note by pocketing the first round 2-0. The Indian continued her good showing but lost the second round 3-4 to the Kazakh girl.

But Aarti was completely off colour in the third round which the Kazakh girl pocketed comfortably with a 3-11 margin to seal the match and a place in the last 16 in her favour.

Anand, on the other hand, fought valiantly in the first two rounds but his Korean opponent did just enough to garner a point each from both the rounds. The Indian managed to earn a point in the third round but also gave five points to lose the encounter.

Later in the day, another Indian Nakul Malhotra will face Elias El Hedari of Lebanon in the quarterfinals of the men’s +87kg division. 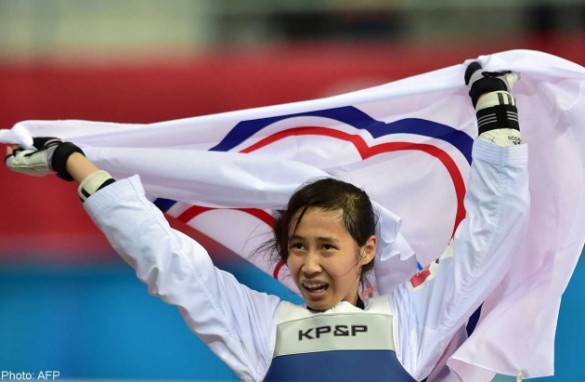 The 19-year-old Huang defeated her opponent Yoon Jeong-yeon 4-2 to win the eighth gold medal for Taiwan.

Huang has been on the offensive since the quarterfinals. She exhibited the same aggressiveness in the final, with an upper roundhouse kick that landed on her opponent’s face in the first round, which gave her an early 3-point lead.

Down 3-0 after the first round, Yoon responded with one-point kicks in the second round and early in the final round. Huang scored a point of her own midway through to give herself a two-point cushion.

In the final round, Huang was already leading by two points. She stayed on the offensive and scored one more point in the third round. In the final minute and a half, Huang adeptly kept her opponent at bay to secure gold.

A Strong Showing Leading to the Game

Huang had won a series of matches leading to the final. She first defeated her Nepali opponent 12-0, then her Vietnamese opponent 13-5, and finally her Iranian opponent 5-0 in the quarter final.

Studying at National Taiwan University of Sport, Huang is one of Taiwan’s top athletes. She has attended seven international competitions so far this year, grabbing four gold medals and two silver medals.

Huang grabbed a gold medal at the 2014 Canada Open, her very first international match of the year, and then secured a silver medal in 2014 US Open Taekwondo Championships.

In the 2014 Asian Taekwondo Championships, which took place in May, Huang lost to Yoon Jeong-yeon, her opponent yesterday, to take a silver medal.

When Taiwan’s budding taekwondo star Lin Wan-ting made her international debut at the East Asian Games in October last year, her sights were already set on winning a gold medal at the Asian Games in Incheon, South Korea.

Yesterday, she fell just short of that ambition, claiming a silver medal in the women’s 46kg class after losing 10-4 in the final to world No. 1 Kim So-hui of South Korea.

The 18-year-old, who shocked Kim in the round-of-16 at the Asian Championships in May, beating her 8-7, kept pace with her South Korean rival through two scoreless rounds and through much of the final round, when the two traded penalty points and kicks.

However, an aggressive attacking move by Kim with about 30 seconds left put Lin on the defensive and resulted in a three-point kick to the Taiwanese’s head to put the South Korean up 6-3.

Kim then clinched the win in the final seconds with a four-point reverse kick to Lin’s face that was granted after a challenge by Kim’s coach.

Lin, who finished third at the Asian Championships, did well to get to the final.

She beat Asian champion Panipak Wongpattanakit of Thailand in the semi-finals, 5-4, after building a 5-1 lead and then holding off the hard-charging Thai in the final 30 seconds, conceding just three points.

Pakistan started well by securing two points in the first round to Sen’s four. But Sen Qiao blanked him in the second and third round with attacking and tactical play to move into quarterfinal round.