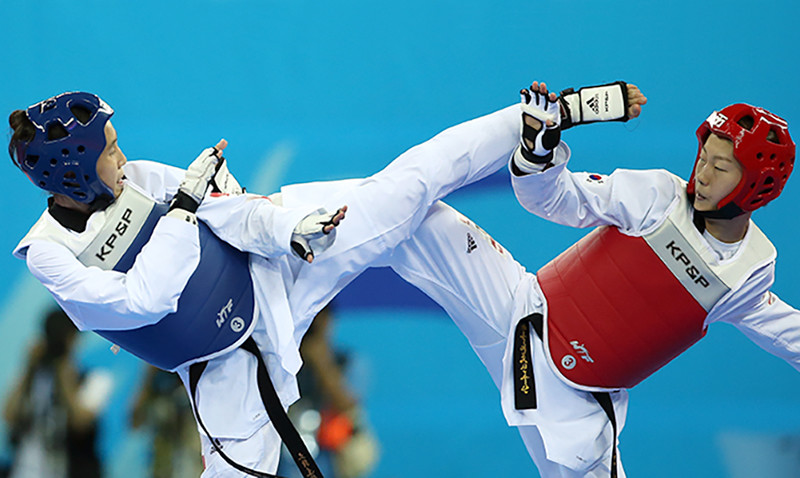 These Asian Games have proven that taekwondo has widened its international presence and that the competitiveness of the participating countries has been equally standardized.

Taekwondo became an official sport in the Asian Games in 1986 in Seoul. It was selected as an official Olympic sport for the Sydney Olympics in 2000. There were criticisms, however, that Korea, its country of origin, was winning all the medals. Thanks to the many Korean coaches who have gone overseas, however, international athletes have now been able to raise their competitiveness in the traditional Korean martial art.

The game today is so standardized that predicting the results in international taekwondo competitions is no easy task. Taekwondo athletes from Taiwan and Thailand, both of which won gold medals in the taekwondo events in Incheon, are taught by Korean coaches. You Young Dae leads the female taekwondo team for Chinese Taipei, and Choi Youngseok, who has received a medal from the king of Thailand, is in charge of the Thai national team.

Not only gold, but all the medals were shared. A total of 16 medals went to athletes from seven countries on September 30.

“In Taiwan, all taekwondo matches are taped so we can re-watch any match between any player at any time. When a Taiwanese athlete wins, they will get prize money worth about KRW 100 million. Though the money is not always important, such support makes the athletes work harder,” You added.

Taekwondo matches at the Incheon Asian Games last until October 3 at the Ganghwa Dolmens Gymnasium, with four more gold medals finding their owners on October 2 and four more on October 3.