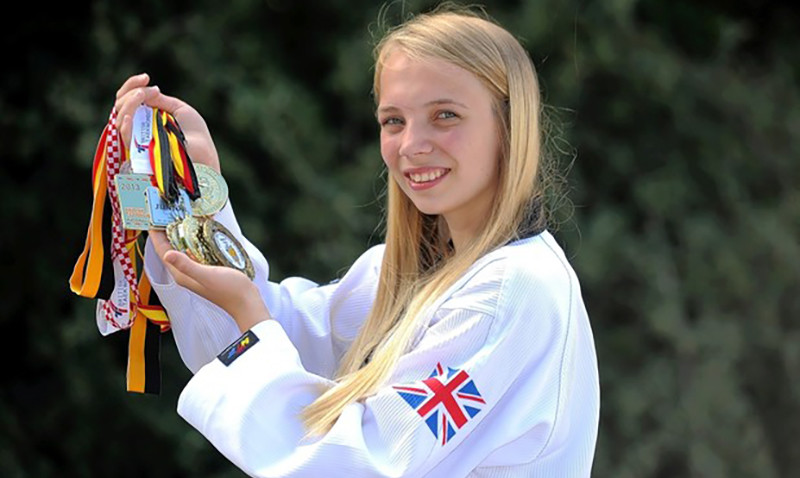 South Hams Taekwondo Club’s Bradley is one of only two girls selected for the prestigious tournament, which runs from September 26-28.

Bradley is fast becoming a regular member of GB squads having represented her country at cadet and junior events, but never before at under-21 which is as close as it gets fighting at senior level.

The Europeans will provide the exciting second dan black belt star with the opportunity of further enhancing her reputation and put her trophy shelf under more danger of collapsing.

Bradley, at 17, is one of the bright, young things who by dint of her own hard work, natural talent and unashamed fearlessness when it comes to fighting, is seemingly assured of a bright future in the sport she loves.

However, before heading to Austria and a tilt at a European title, she will want to travel as a national champion.

Bradley has the chance to win both juniors and senior titles in Manchester on the weekend of 20-21 September.

She competes in the body-weight range of -46kgs as a junior and -49kgs at senior level.

According to her dad and biggest supporter, Andy Bradley, these events are all leading toward next year’s major tournament – the World Championships.

But before then she will be hoping to win her first England call-up at the Commonwealth Championships which will be staged at Edinburgh in November.

“It’s going to be a busy month for Katie and a pretty hectic couple of days for her with the nationals and Europeans coming so close together,” said Andy Bradley.

“But, to be fair, Katie’s busy all the time and absolutely thrilled to be in the under-21 squad, it’s a big challenge for her.

“She thrives on challenges, though, and won’t be fazed, just be focused on doing her best and making life as difficult as possible for her opponents.

“Katie’s tough, single-minded and very, very talented, which is a terrific combination which has been improved by the coaching at South Hams.”