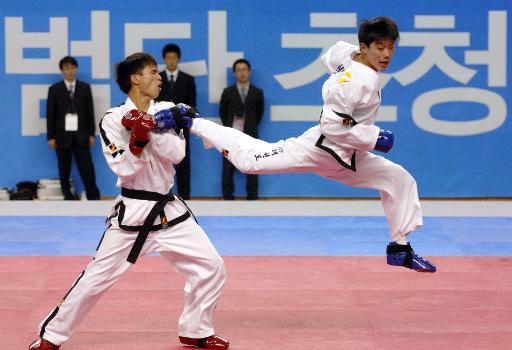 “The agreement paved the way for North Koreans and other ITF-affiliated athletes to compete at the Games, as early as at the 2016 Rio Games,” Kang said.

The WTF is the only international taekwondo body sanctioned by the International Olympic Committee, and previously only athletes from WTF member countries could compete at the Games.

The agreement between the two governing bodies was reached on the sidelines of the Youth Olympics in the eastern Chinese city of Nanjing, Kang said.

“With this agreement, the WTF will do its upmost to ensure that every taekwondo athlete has the opportunity to compete at the Olympic Games,” Choue said in a statement released by the governing body.

Chang said: “This is only the beginning of our cooperation and there will be more to achieve together.”

Bach called the signing “a historic step for taekwondo”.

“With common roots and a common history, the two federations belong to the same family and it is great to see such an accord,” he said.

Under the agreement, WTF and ITF athletes will be free to compete in each other’s competitions, but they will have to observe the host’s competition rules.