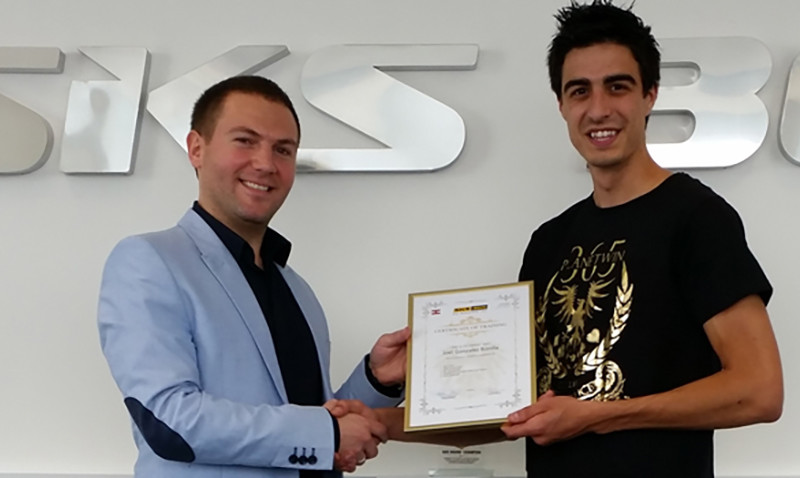 As we informed in a previous article about Joel (See: Joel Gonzalez will fight against match-fixing in the Spanish football), he said that he had gone to Austria to complete his preparation in match-fixing, the area in which he will work after completed his studies in Criminology.  In Austria, he worked for SKS365, experts in “innovative multimedia services, sports news and gaming technology”.   Here´s the interview taken from the official SKS365 web site.

Spanish Olympic gold medallist Joel González Bonilla, who also works at Spain’s Ligas de Fútbol Profesional, came to SKS365 in Austria to learn the ins and outs of sports  betting from risk management legend Ivan Babić. The 24 year old multiple Taekwondo champion recently started working on the prevention and investigation of match-fixing in his home country. Due to SKS365’s proud record of helping authorities and sports    associations around Europe against this crime, he was very happy to receive this essential training from the SKS365 experts. The Olympian was thrilled to receive this exclusive insight and vowed to fight “for real matches and against sports theatre”.

Your first trainer was your father when you were ten years old. Was it your own choice to learn Taekwondo?

Yes, it was my own decision. I started about one month after my father had opened his martial arts studio in our hometown because it really interested me. Before that, I was totally in to football and that was absolutely fine for my father too. He never pushed me towards martial arts. Of course, now he is incredibly happy about my Taekwondo successes.

You became world champion and Olympic gold medallist. When did the fun turn professional?

Well, I first won some youth championships in Spain: national champion at age 14, then second place at 15 and 16. But the real hard training, with 6 to 8 hours per day, started when I was 17. The Taekwondo Federation of Spain invited me to the national training centre in Barcelona. Then came the years of very hard training and tough competition, world championships and the London Olympics.

You also have a university degree in criminology.

Yes. Actually, I never liked to study in school and I didn’t want to listen to my parents, who told me every day that I need to learn something besides the sport. But then, at the national sports training centre in Barcelona, I was confronted with the lives and stories of all the older athletes and I realized: wow, I should really have a plan for what happens after I’m 28 or 29!Criminology sounded quite interesting and in fact I really enjoyed it!

Were you planning to combine criminology with sport?

I was hoping to do that somehow, but in fact I didn’t expect it to turnout so nicely! One day I just received a call from Spain’s Liga de Fútbol Profesional and they wanted me to join their new Integrity Department. I guess they must have really liked my combination of professional sports and criminology.

Does that mean it’s over with Taekwondo now?

Oh no! I only accepted the job on the condition that I will have time for Taekwondo training and competitions. And they agreed. My goal is the Rio Olympic Games 2016!

How is your anti match-fixing training going at SKS365?

Joel: I’m really happy I’m here. The guys from the risk department and everyone here at SKS365 are helping me a lot. It’s so important to fight match-fixing! I’m a football fan myself and I want to see real matches and not football theatre! I felt very welcome here at SKS365. What really impressed me is the work of the risk department and the odds compilers. There are so many different sports, matches and options you can bet on and there are real people here who understand and manage all these processes. This human aspect of bookmaking: that surprised and impressed me.