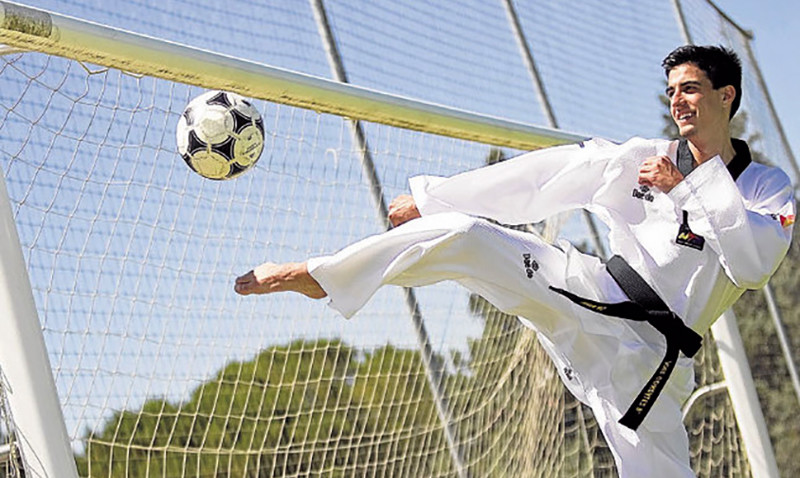 His knee could not stand anymore, so Joel decided to undergo surgery. It was during December 2013 during his break,  when the Olympic Champion and three-time World Champion, made up his mind to prepare for his other passion: criminology. The Spanish Professional Football League (LFP) wants him to investigate match-fixing in the Spanish football, and so he travelled to Belgium.

The Taekwondo athlete, who already sees the light at the end of the tunnel and wants to return to competition, says that his expectations were met with margins: “Everyone in Federbet treated me very well. They explained how the world of match-fixing and betting works, they’ve taught me the tools used to detect scams in matches, because it really happens, and they know how to investigate.  It is a very interesting world”, he says.

He was surprised by the amount of illegal bets that happen every week: “There are a lot of illegal bets, approximately ten per week around the world. I liked the experience so much and was so good at it that I even travelled to Vienna, to work with one of the best boommaker international companies: SKS. I worked for the Risk Department, directly with the best in the world in this section. It was a great experience.  Learning from the best is the best way to learn. I could control the Brazil World Cup. It was very exciting”, he says.

González confessed that there were no match-fixing during the Brazil World Cup: “A couple of matches from the World Cup were identified to be potentially fixed, but in the end it was concluded that they weren´t.  When Federbet says that a game is fixed and brings the case to FIFA and UEFA, they must be 100% sure.  During the last World Cup it was proved that any of the matches were fixed”, said Gonzalez, who did not want to reveal which matches were suspicious of being fixed.

Seeing Joel talking about illegal betting and match-fixing, one realizes that it is a world that he loves, just like Taekwondo: “Research is the most beautiful part of Criminology for me”, he says. “The LFP really wants to end with match-fixing.  They are creating rules for prevention so that this does not happen again, and if it happens, they want to be able to detect it and make a thorough investigation.  It is true that investigation must be exhaustive and it could turn very complicated, but once you can do it and you have the right tools, it is an interesting and exiting job. You select the game and study the two teams carefully.  The bets could rise or drop if there is an injured player or not, how many games are left, the emotion of the moment…you must evaluate and consider every detail.  We are talking about sports, which is what I like the most. It is the perfect mix for me” says the Olympic champion.

Criminology will take Gonzalez from the Taekwondo to football: “I still have to sign the final contract with the LFP. I was hired by Federbet for two months and now I have to go to Madrid to sign with the League. It is a 1-year contract with a possible extension to four years.  They want to implement the process in Spain and I am happy because they have included me in the future plans.  I am very excited”.

We asked Joel to give us some keys to detect if a match is not 100% clean: “It is complicated. When you have the suspicion that a match can be fixed, you can notice it immediately. Experts know, even before the match starts, when a match is fixed.  They analyze the bets.  When they see strange amounts of money being bet on bizarre results, they do a thorough research, and investigate why this is happening, where the money comes from and how much money is involved.  When it goes up to 1 million euros, the alarm is activated”, Gonzalez explains comprehensively to give us an idea on how these mafias extended all over the world act. “It would be great for me to apply my knowledge on sports, to carry out a research and study the reasons why these things happen in the sporting field is exciting for me.  It is perfect for my future once I quit Taekwondo”.  For now, he’s already made a big step to get it.