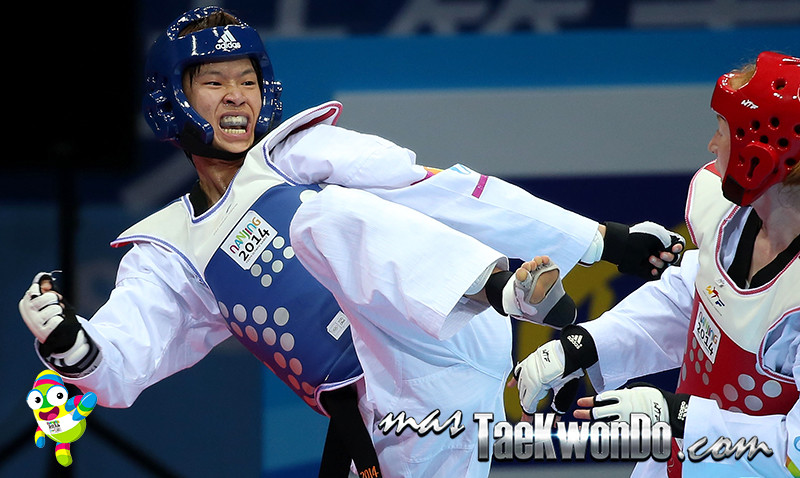 Huang, the silver medalist at the WTF Taekwondo Qualification Tournament for the 2014 Nanjing Youth Olympic Games last March, made it to the final match by beating her semifinal-match opponent, Mexico’s Mitzi Yemaima Carrillo Osorio, 6-1.

“I am very happy to be the champion and I was very confident of winning the gold medal,” said Huang shortly after the victory ceremony. “I was very fat before, but I ate less food and trained harder to keep in shape.”

Mexico’s Carrillo Osorio and host China’s Tian Rui Zhan had to settle for the bronze medal in the same female weight division.

The president of the Belgium National Olympic Committee presented medals to the winners of the female weight category, together with Wu Jingyu, a double Olympic taekwondo medalist and the taekwondo athlete role model of the 2014 Nanjing Youth Olympic Games.

Huang, the gold medalist at the WTF Taekwondo Qualification Tournament for the 2014 Nanjing Youth Olympic Games last March, advanced to the final match as he defeated Spain’s Jesus Tortosa Cabrera 7-1 in a semifinal match.

The bronze went to Belgium’s Mohamed Ketbi and Spain’s Tortosa Cabrera in the same weight category.

Samih Moudallal, the IOC member of Syria, presented the medals to the winners of the male weight category together with WTF President Chungwon Choue.

Thomas Bach, president of the International Olympic Committee (IOC), visited the venue of the taekwondo competition for about one and a half hours from 7:45 p.m. to watch semifinal and final matches, along with the awarding ceremonies. The IOC president also watched a taekwondo demonstration by the Chinese national demonstration team just next to the venue. Honorary IOC President Jacques Rogge also visited the taekwondo venue almost the same time.