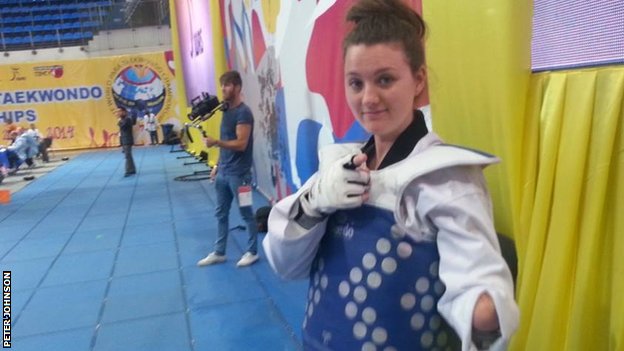 Truesdale, 25, won the K44 class at the World Championships in Russia last month, and is also European champion.

A decision on whether Para-taekwondo is added to the schedule for the 2020 Tokyo Paralympics is due in October.

“Everyone connected with the sport will have everything crossed for the Paralympic announcement,” she said.

“I will be 31 then but I will always continue to do taekwondo until physically I can’t do it any more.”

Only the Kyorugi discipline is being considered for inclusion in the Paralympics;

Badminton also wants to be added to the Tokyo programme, with the International Paralympic Committee set to announce its decision on 23 October.

Truesdale said it would be “massive” for her sport to achieve Paralympic status.

“It will be a brilliant way to raise the profile for disabled people and encourage a lot more people to do the sport,” she told GB Taekwondo.

And in six years time Truesdale may have fathomed a way to get the better of Canadian veteran, Lisa Standeven. The two reprised their familiar head-to-head at the recent World Championships in Russia and again 47-year-old Standeven came out on top.

This time though there was a twist in the final tale as Truesdale was upgraded from a fourth silver to a first gold due to a re-classification of the K44 class.

WTF officials deemed the two should not have competed against each other because of different disabilities, and therefore awarded Truesdale the gold medal

“Lisa was in her own category with no other opposition,” explained Truesdale. “So, they put her in the section I was in because they wanted to give her a fight.

“I am happy to get gold but disappointed at the same time. I have played her a few times now and still keep losing by a couple of points.

“It’s really frustrating because she is not that fast and not really any better than me. I end up getting caught all the time and it’s something I need to sort out.”

Truesdale, 25, returns to the mat later this month for a tournament in London followed by the National Championships in Manchester this September.

The Tokyo Paralympic Games will be held from 25 August to 6 September 2020.