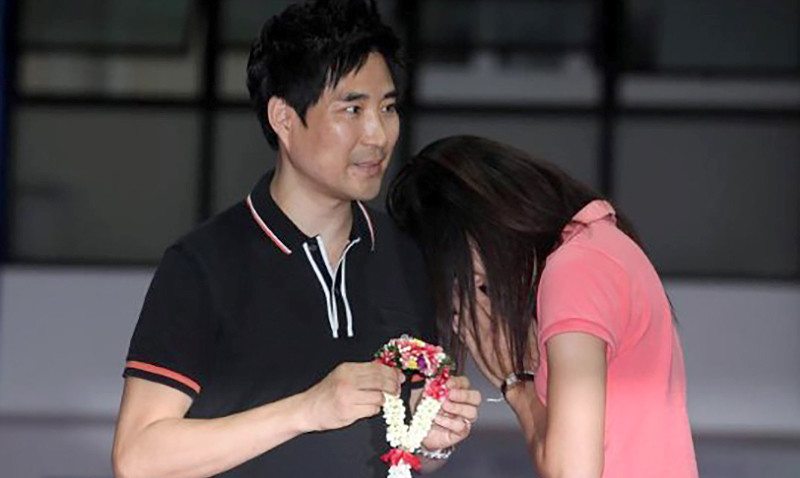 But while the Korean coach forgives the athlete, her return to the national team will be determined next month. Offering him a flower garland, Rungravee, 23, apologized to Choi in front of an army of … of reporters at the Taekwondo Association of Thailand (TAT) headquarters.

“I want to apologise to all concerned parties especially coach Choi for the incident,” Rungravee told reporters. “The coach forgives me. He told me to focus on training. I have learned my lesson.”

Rungravee had claimed Choi punched her several times to punish her after she lost in her first bout at the Korea Open earlier this month.

“I did it when I was angry. It affected me and my family,” said the Phichit-born athlete.

Rungravee had said she would quit the national team after Choi’s punishment but she has since said she wants to continue to represent Thailand.

Rungravee reiterated yesterday she wanted to return to the national side and to win a berth for the Asian Games in South Korea in September.

“I love taekwondo and I’d like to get another chance to compete for the country,” said the fighter. “I will follow the coaches’ instructions and do my best.”

TAT adviser Nanat Khemsophot said TAT president Pimol Srivikorn would decide whether the association would welcome her back to the national team after he returns from the US on Aug 4.

Rungravee won a bronze medal in the 62kg division at the 2014 Asian Championships. She was in Thailand’s 20-player squad who would vie among themselves for Asian Games places.

She was tipped to secure an Asian Games spot because she was a leading player in the division. However, her future is now uncertain following the controversy.

Choi said on Monday he would welcome her back to the national team. He has insisted that he did punish — but did not punch — her because she arrived at the Korea Open venue late.

Choi, 40, began his Thailand reign in 2002 and quickly made his presence felt by guiding Yaowapa Burapolchai to claim silver at the Asian Games just a few months after his arrival.

He became a household name here when Yaowapa won Thailand’s first ever Olympic medal — a bronze — in taekwondo at the 2004 Athens Games.

The taekwondo has since won a silver at the 2008 Beijing Olympics and a bronze at the 2012 London Games.

TAT bosses hope their athletes will win the country’s first ever Olympic gold medal in the sport at the 2016 Rio Games. Choi’s next task is next month’s Youth Olympics in Nanjing, China.