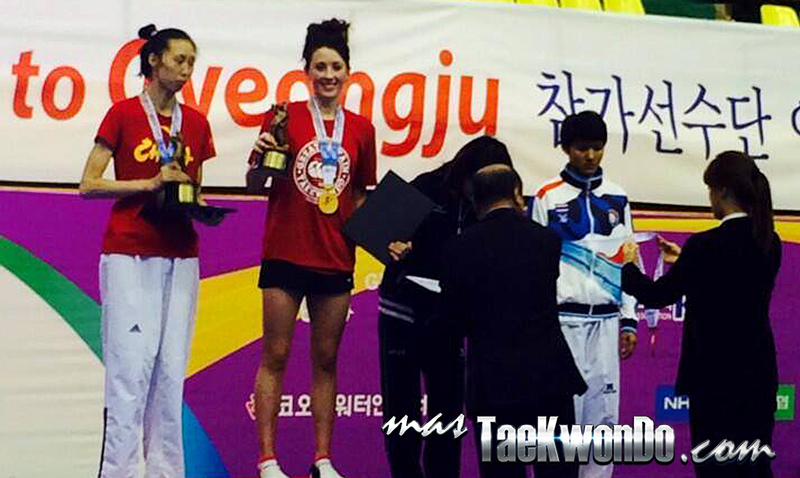 Britain’s first ever female Olympic taekwondo champion hit back from her recent World Grand Prix disappointment to claim gold at the Korean Open.

The Flint star collected valuable ranking points towards qualification for the Rio 2016 Olympics but no medal at the GP in China.

So, only gold would do when the action switched to Gyeongju. And the 21-year-old London 2012 champion duly delivered with victory in the -57kg weight division.

“I had five really tough fights,” she said after a 5-2 final victory over Chinese rival, Wangyun. “And what a long day. 14 hours at the competition.”

Jones was part of a large GB squad, liberally laced with youth and experience, and they don’t come any younger than her Welsh compatriot, Lauren Williams.

The 15-year-old former kickboxer already made her mark in WTF taekwondo by winning a bronze medal at the World Junior Championships in Chinese Taipei earlier this year.

Williams, who came into the sport via the UK Sport funded, Fighting Chance, Battle4Brazil initiative last September,now has another bronze medal in her collection. The Newport teenager reached the semi-finals of the -59kg category before losing 13-7 against Iranian Kimiya Alizadeh.

However, for the rest of their team mates it was a case of so near yet so far at the end of a long and exhausting stay in the Far East.

European silver medallist, Damon Sansum, is often involved in high scoring matches and so it proved.Sansum amassed 35 points in winning his opening two contests and another 18 in his quarter-final.

Unfortunately, for the Manchester based star he also conceded 23 in his last eight match and went out of the competition.

Jordan Gayle’s hopes were high after a brilliant opening victory in the -68kg weight division against Korea’s -58kg world champion. Drawn against another Asian ace in the last 32, Mancunian Gayle succumbed 17-15.

World Grand Prix bronze medallist Mahama Cho lost in the last 32 of the heavyweight division while 2014 European bronze medallist, Asia Bailey,went out in the quarter-finals of her competition.

Mancunian Michael Harvey fought past two Korean opponents to reach the last 16 of the -68kg only to slip up against his Canadian rival.

The squad has now returned to its Manchester training best for a few days welcome break. However, preparations will soon start for the second half of the year including further World Grand Prix events in Kazakhstan and Manchester.