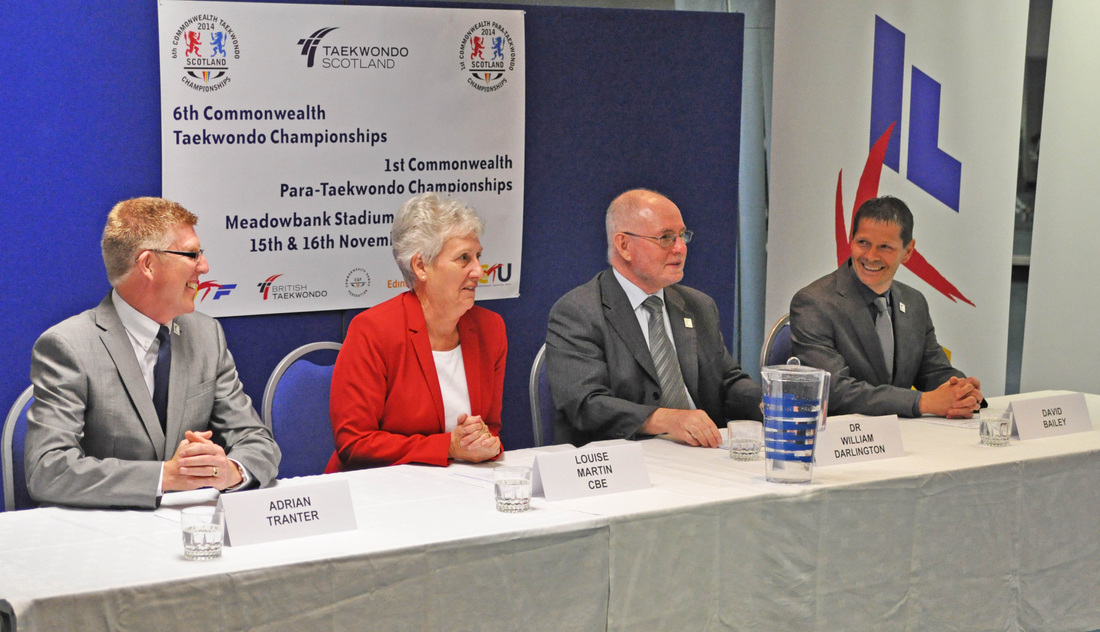 Some five hundred players from around the world will participate in the 2014 Commonwealth Taekwondo Championships being held on November 15 and 16.

It’s the first time the prestigious event has been held in Scotland.

The Championships will feature Kyorugi (fighting), Poomsae (a defined set of movements incorporating blocking, kicking and striking techniques) and, for the first time, Para-Taekwondo.

To demonstrate this spectacularly athletic sport, today’s news conference was literally “kicked off” with short taekwondo bouts featuring Hassan Haider and Kristian Kinnon and Jordyn Smith and Tegan O’May from Falkirk’s Central Taekwondo Academy. This was followed with a poomsae demonstration by Kimberley Clarke from Elgin’s Dynamic Taekwondo.

It was launched today (July 11) at Meadowbank. Guests included Louise Martin CBE, Vice Chair of the Glasgow Commonwealth Games Organising Committee, who said: “I am thrilled that the 2014 Commonwealth Taekwondo Championships will be coming to Scotland for the first time later this year.

“2014 is a massive year for sport in Scotland and this is yet another international event to add to an already bursting calendar with, of course, the Commonwealth Games in Glasgow later this month. Sportscotland works very closely with Taekwondo Scotland to help promote and expand the sport and I am delighted that recent developments mean that taekwondo – including para-taekwondo – now has the opportunity to feature in future Games.

“Taekwondo is a growing sport with worldwide popularity and I look forward to welcoming competitors from all over the Commonwealth to Edinburgh in November.”

Held every two years under the auspices of the World Taekwondo Federation (WTF) and the Commonwealth Taekwondo Union (CTU), the Championships involve world-class competitors and were first held in Australia in 2006.

Invitations have gone out to sixty-four Commonwealth federations – from Antigua to Zimbabwe – and large national teams are expected from Canada, Australia, New Zealand, Pakistan, India and Malaysia as well as England, Wales, Northern Ireland, the Isle of Man…and of course Scotland.

It’s being hosted by Taekwondo Scotland, the sport’s governing body, whose Chairman, Dr William Darlington, a 7th Dan black belt, from Glasgow, said: “I’ve been looking forward to this for over ten years since my colleagues and I started lobbying vigorously for taekwondo to become a fully-fledged Commonwealth Games sport.

“But we’re delighted to invite top players to come to Scotland in the Commonwealth Games year. I’m looking forward to welcoming the national teams from around the world to the capital this winter for what promises to be an unforgettable event.”

With more than 70 million participants worldwide, taekwondo is the world’s most popular martial art. US President Barack Obama is a black belt, superstar Kylie Minogue keeps in shape by going to classes and David Beckham’s son Cruz trains at a club in Los Angeles.

The sport received a major boost at the London 2012 Olympics when it was televised for the first time and reached a 3.6 billion global audience.

“People started watching this great agility sport that’s fast, exciting and entertaining with non-stop action. Thousands joined their local clubs as a result so the sport is currently going from strength to strength,” said Dr Darlington.

Event Director is David Bailey, also a 7th Dan black belt, from Larbert. A former British Champion, he runs Central Taekwondo Academy in Falkirk, one of the country’s largest.

“It will be the biggest taekwondo event ever to take place in Scotland,” he enthused, “and especially in the Year of Homecoming it will do a brilliant job both in raising the profile of taekwondo and in showcasing all that’s great about Scotland.

“It’s the friendly sport for the friendly games,” he added. “Scotland is known the world over for being warm and welcoming and our organising committee is committed to putting a smile on the faces of everyone who attends.”

Sure to be a huge hit at the Edinburgh Games is his daughter Asia, the sixteen-year-old Scottish taekwondo sensation. Winner of the Dutch, Croatia and German Open Youth Championships, she made history in May by taking bronze at the European Championships in Azerbaijan.

“Asia’s career got off to a flying start and she has made a real name for herself. A European bronze at just 16 is incredible and she beat some of the world’s best to get it. I’m looking forward to seeing her replicating that kind of form in Edinburgh for the Scottish team,” said David.

Adrian Tranter, 7th Dan and President of British Taekwondo, commented: “These Championships are eagerly anticipated by the whole CTU family worldwide. As we showcase our sport both in Kyorugi and Poomsae, it is very satisfying that we are including Para-Taekwondo in the event for the first time.

“It is hoped that this event will add strength to our lobbying of the future Commonwealth Games hosts for 2022 so that WTF Taekwondo can be included for the first time. We look forward to welcoming everyone to Edinburgh and to making the event a spectacle of friendship and sport.”

“Taekwondo is an increasingly popular Martial Art and we are committed to providing the facilities here at Meadowbank for people of all ages to access the sport and develop their skills.

“It has been a pleasure working with Taekwondo Scotland and, with their dedication and passion, it is sure to be another inspiring sporting event here at Meadowbank.”