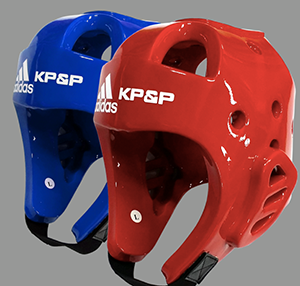 Although Adidas-KP&P EHP did not test with the Senior Division, the feedback was still positive enough to be acceptable for the Grand Prix or any major events.

On the first day of the event (6/12/14), Men’s Junior (-55kg) 42 matches were using the EHP. The final results of the day were outstanding and well received.

The valid hit level was set to 1. Almost all EHP hits were scored accurately and fairly.

Importantly, even though a coach challenged the credibility of the EHP the video replay clearly showed that there was no contact.

The EHP successfully recorded all impacted hits to the face (where the EHP is not covering).

Eventually, WTF decided that there was no need for any more field tests because they’ve seen more than enough of what the EHP can accomplish. So the Junior Female Division was not able to use the EHP.

One of the international referee said by judging by the eyes that,“It was hard to see any weaknesses. There were uncertain situations where the EHP could have been questioned but there will need to be extensive review. However, as we see the results of this field test, there should be no problem to use it for the next major event.”

Mr. Yang the WTF Technical Director said, “This was beyond our expectations.”

Adidas-KP&P said, “We are very pleased to receive such positive results and reviews right after the Bolivia Open field tests.”

“Our EHP is able to detect the valid kicks and hit levels so it enables us to catch all kicks to the face, where there is no EHP.”

In the meantime, Adidas-KP&P will operate the EHP in open tournaments, continuing in August. If there are more favorable results and reviews for the Senior Division in the open tournaments, there are chances the EHP may appear in the Grand Prix and Rio Olympics 2016.