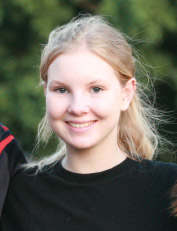 At the age of seven, I started practicing taekwondo in my hometown Bremen, Germany and since July 2013, have had an instructor’s license.

After graduating from high school in May 2013, I got the opportunity to take part in a voluntary service, organized by the Taekwondo Peace Corps, as well as an internship with the WTF in Seoul. Things started on July 7 in Papua New Guinea with a seven-week mission for the TPC.

“Love, Purity and Diligence” is the motto of the Caritas Technical Secondary School (CTSS) in Port Moresby, the capital of Papua New Guinea. Even though it is very dangerous, incredibly poor and one of the world’s least explored countries, you feel safe and extremely welcome when entering the girls’ school because those values are taken very seriously among students and teachers.

The team consisted of five members: four Korean volunteers (two girls, two boys) and me. We were taken care of and the sisters of Caritas always made sure we were healthy and well.

The TPC has been sending Korean coaches for two years and there is a Korean coach working permanently with the students on taekwondo. A demonstration team has been created among the best students. We trained them every day, always trying to keep the training interest- ing and varied. Taekwon dance, kyorugi and kyokpa were the most frequent.

The first difficulty was communication between the Koreans and me. Their English skills were rather poor and I was al- ways afraid of missing out on important information. All the heads of the school and sisters were Koreans as well. As the program went on, the communication got a little better as their English im- proved due to their English classes. My Korean did, too.

On the first weekend in Papua New Guinea the sisters and some teachers pre- pared a trip to a resort on the beach. We made friends with a lot of people during the “PNG-style” barbecue and swimming. They tried everything to let us experience their country and make us feel welcome.

After a week of resting and experiencing the new culture, we were facing our first week of taekwondo. Tuesday to Friday we would teach all the students of grades 9 to 11; about 16 classes per week. On Mondays all the coaches went to the learning center to teach basic motions to the kids of elementary school age. Because of their young age and limited con- centration span, the class lasted just 20 minutes.

The periods at Caritas went on for either 40 or 80 minutes. Unfortunately a lot of students were not so fond of taekwon- do so sometimes up to one third would sit down telling us they were sick. I am positive that this occurs due to the fact that the CTSS only offers taekwondo classes as sport. Nevertheless, some students were extremely motivated.

Due to the fact that the Koreans all majored in kyorugi and I have always practiced poomsae we decided to teach poomsae for the first two weeks and carry on with kyorugi afterwards. I discov- ered that the students as well as the Koreans really enjoyed my way of warming up. Using fun running and coordination games to get ready for taekwondo was a new experience for all.

While the Koreans learned new ways of practicing taekwondo from me, I ex- perienced many new forms of training from them. During the following weeks the students improved their taekwondo skills, and we also learned how to deal with space, attitudes and motivation. 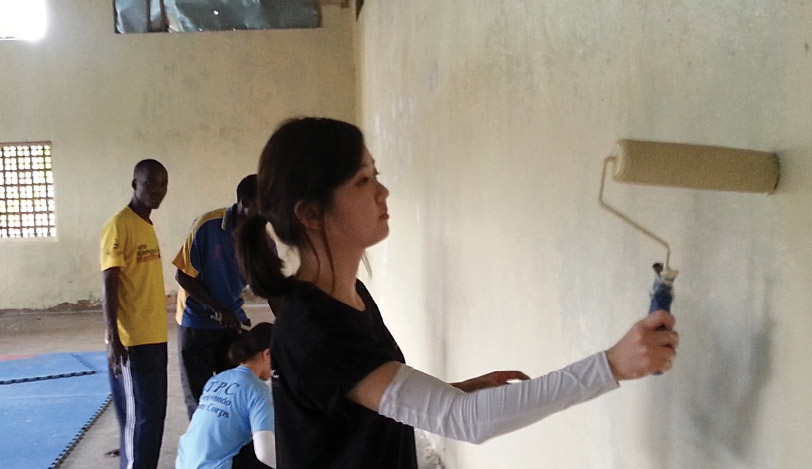 Everyone really appreciated our work so on weekends they would always take us somewhere to learn more about PNG. On the second weekend, we went trek- king down the “Kokoda Trail,” a path down which, during World War II, PNG helpers used to carry wounded Australian or American soldiers. They would also take us to crafts markets and resorts where we could go snorkeling and kayak- ing, and even to very poor villages where the demonstration team performed. We also attended a great traditional show.

I felt the program was very well organized by the TPC. However, I have some suggestions. The WTF has 206 member nations, and I think it would be great to work with them all. Until now, only Korean volunteers have been given this oppor- tunity. My suggestion would be to send two Koreans with either one or two inter- nationals to each country. I would be glad to use my contacts in Germany to try this.

I would also suggest that the volunteers offer a crash course for future instructors to make sure that students’ progress in taekwondo continues after the volun- teers leave. Another possibility is to qualify locals to be able to instruct a group and offer them a visit to Korea each year.

I also suggest working with international sports federations apart from taekwondo. In PNG, taekwondo was the only sport on the program. I think it would be great to urge different sports federations to establish their own Peace Corps and work together with the TPC. Another alternative would be offering different sports in the afternoons to balance taekwondo. Sports like soccer, basketball and volleyball do not require a lot of materials.

Going to Papua New Guinea has inspired me. I was very lucky to have this opportunity to work with such amazing, loving people. I will stay in contact with all the friends I made and am proud and thankful for my WTF internship.