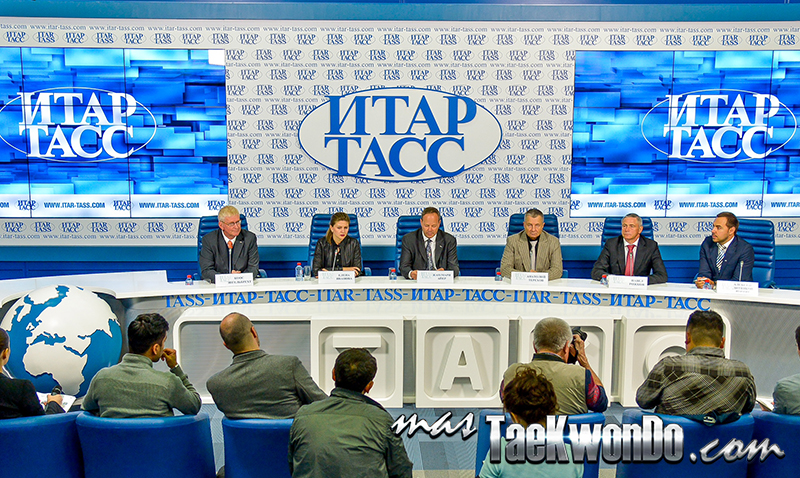 The press conference, which took place at the ITAR-TASS in downtown Moscow, drew such dignitaries as Pavel Rozhkov, chairman of the Executive Committee and first vice president of the Russian Paralympic Committee; Koos Engelbrecht, chairman of the WTF Para-Taekwondo Committee; Anatoly Terekhov, president of the Russian Taekwondo Union (RTU); and WTF Secretary General Jean-Marie Ayer.

The conference took place three days prior to the opening of the 5th WTF World Para-Taekwondo Championships, which are scheduled for June 21-22 at the Dinamo Sport Palace in Krylatskoe, Moscow. The championships are expected to draw a total of 121 athletes from a record 40 countries.

“We have to wait until the IPC’s final decision, but we are quite positive that taekwondo will be on the official program of the 2020 Paralympic Games,” said Mr. Koos at the conference.

The International Paralympic Committee (IPC) is scheduled to make a final decision on the official program of the 2020 Tokyo Paralympic Games this October in Berlin, Germany or in the first quarter of 2015 at the latest.

RTU President Terekhov said, “it is the second time for Russia to host the WTF World Para-Taekwondo Championships.” “This time we organize the championship separately as it is so important before the IPC’s decision.”

“My dream now is to put taekwondo on the 2020 Paralympic program,” he said. The Russian Taekwondo Union hosted the 2nd World Para-Taekwondo Championships in St. Petersburg, Russia on May 10, 2010, which attracted a total of 65 athletes from 21 countries.

WTF Secretary General Ayer said that “the Moscow event has a special meaning as the WTF has applied for being part of the 2020 Paralympic program. The WTF is going all out to meet IPC-set requirements.” “Our vision is to keep developing taekwondo and provide opportunities for all.”

“We will do our utmost for taekwondo to be included in the official program of the 2020 Paralympic Games,” said Mr. Pavel of the Russian Paralympic Committee.