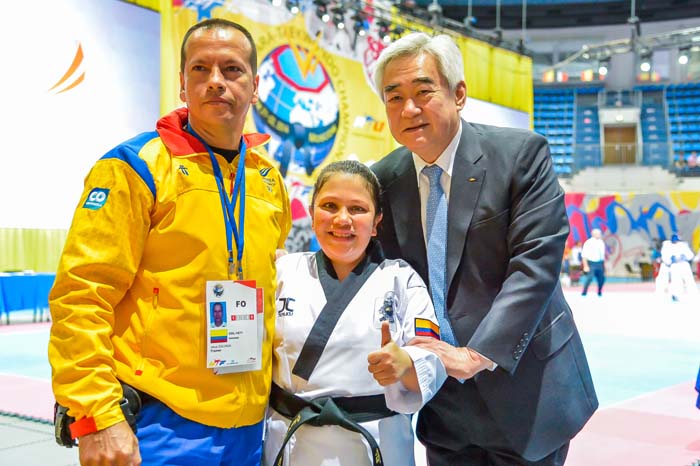 Events got off to a thunderous start.

Russian band Diskotaka Avaria – their images streaming over the venue’s giant projection screens behind them – let rip with a blend of guitar, synth, saxophone and a roared “Taekwondo!”

The lead singer got the audience – or at least, the Russian speakers – singing along. Following up with a screamed, “Welcome to Russia!” he invaded the stands to a flurry of high fives, throwing in a few Cossack dance steps for good measure and a barrage of the Russian word every participant at the championships immediately got to know: “Davai! (“Go!”).

On the sidelines, a crew of local volunteers surged to their feet – igniting a mosh that transformed the fighting arena into a night club. At least one world champion – and the event’s senior Russian official – were spotted in the resultant conga line; probably a first for any taekwondo championship, anywhere.

Next, a laser light show flashed up the logo of the World Taekwondo Federation, the Russian Taekwondo Union and associated bodies for para-sport; laser-animated para-athletes in action; then similarly animated Moscow icons.

How to follow this? The arena lights dipped, and a line of six percussionists marched on, their drums lit up in psychedelic display.

The ceremony’s next segment was more taekwondo-centric. A youthful team of Russian athletes displayed group poomsae in a work of human choreography which would not have been out of place in a championship competition. Behind them, images and flags of participating nations flashed on the projection screens to the cheers of the crowd.

The be-suited VIPs had a stern task to follow the preceding event. WTF President Chungwon Choue wisely dispensed with his prepared speech and spoke briefly, off-the-cuff.

Clearly taken aback by the prior entertainment, Choue noted, “This is one of the most wonderful para-taekwondo championships ever.” After thanking his fellow VIPs for their support, he assured participants that with such a successful London Olympic Games now behind the WTF, his main efforts were now directed at realizing their dream of getting para-taekwondo into the Paralympics.

He finished by delivering his own message to the athletes. “I watched some of your games here today. Win or lose, you are champions … you are truly winners.”

“As an official person I don’t feel very comfortable because it is impossible to dance with you,” said the grey-haired Vladimir Lukin, President of the Russian Paralympic Committee. Then, turning to the inclusion of para-taekwondo in the Paralympics, he said, “But I think that all together, we will manage to make this dream come true.”

Anatoly Terekhov of the Russian Taekwondo Union thanked his team and the volunteers for their hard work. Choue responded, noting that only one nation has ever hosted two world para-taekwondo championships – Russia – adding that the level of the sport in the nation has shot up under Terekhov’s leadership.

Choue then presented his Russian counterparts with some branded gifts, including an honorary black belt to Lukin – who joked that he did not deserve it.

Athletes from Turkey and Denmark then read the Athletes’ Oath, followed by the Referees’ Oath. Terekhov declared the championships open. As the Russian national anthem played, the Russian and WTF flags were unfurled above the competition floor.

And the best was still to come as a six-man Moroccan Para-taekwondo Demonstration Team took to the floor. The four disabled members of the team include one vertically disabled person, and other members with both upper and lower limb disabilities.

Their demonstration began with a plain message written in an idiosyncratic manner. “We are here to show you our abilities,” one member wrote on a white board – with a pen gripped between his toes.

To the accompaniment of the Russian anthem, the team displayed a dramatic group poomsae, then an athlete on crutches performed an overhead kick to a scroll, that released the message, “To Change the Concept of Disability.”

Two athletes then performed crutch-assisted board breaks, displaying moves that would be impossible for able-bodied sportsmen. The next display was appropriate given the ongoing World Cup in Brazil: A demonstration of football skills on crutches, incorporating both calisthenics and ball-balancing.

Then, a sparring match was held between a disabled and an able bodied athlete – overseen by a referee on crutches dancing to Psy’s anthem, “Gangnam Style.”

Wheelchair self-defense was also demonstrated: The disabled “defender” took full advantage of his low position to throw, strike and lock the able- bodied “attacker.” Another message was then unfurled: “Our handicap is the secret of our power.”

Taekwondo is noted for its foot techniques, but it seems unlikely that any participant at the championship had seen the next segment of the show: tea being poured with the feet. The final segment was a melee combat of disabled and able-bodied athletes; the former emerged victorious. With the floor littered with broken boards, the team finished with a display of their national flag.

And it would not be Moscow without ballet. Against a kaleidoscopic light show, a team of ballerinas showcased the kind of balance and flexibility that would have done justice to the most elite taekwondo gym.

The ballet was followed by a breath-taking act: A pair of acrobats suspended from the venue ceiling, gyrated in a display that demanded not just gymnastic ability but also considerable courage: Much of their act saw them hanging upside down, 15 meters above the mats.

“This is not normal, normally we have this kind of stuff in the closing ceremony,” said Yang Jin-bang, chairman of the WTF Technical Committee. “But it was a great idea – make everyone happy!”

A cameraman attending the event was more prosaic. “That was mental!” he said. “I had to ask myself where I was.” 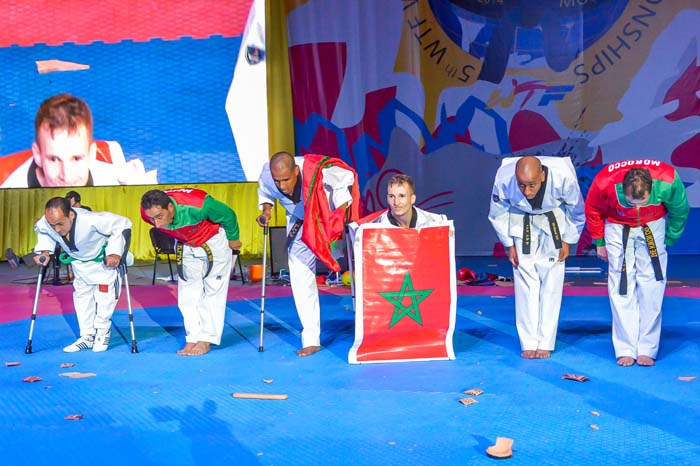