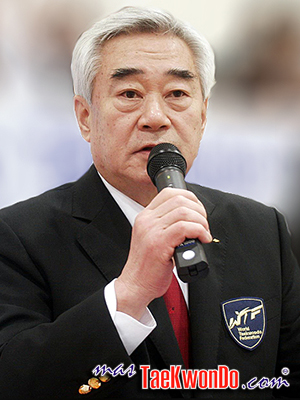 It is my great pleasure to announce that June 11 marks the 10th anniversary of my election as President of the World Taekwondo Federation.

Over the past decade, together we achieved many accomplishments. Today, taekwondo is considered the martial art that has most successfully transformed itself into a modern sport known for dynamic, viewer-friendly, and transparent competitions.

One of the greatest assets of taekwondo has been its universality. That is the same philosophy that the IOC aspires to through the Olympic Movement.

In recent years, we have focused on effecting positive changes for taekwondo, to become a more globalized sport. At the same time, we have also focused on retaining our status as a core Olympic sport. Now, I would like to pay more attention to our contributions. I would like the WTF to become a role model for other international federations. The initiation of the WTF’s Sport Peace Corps is one of the ways we’re doing this.

The WTF is also doing its best to place taekwondo on the official program of the 2020 Tokyo Paralympic Games.

Achieving “A Better World Through Taekwondo” will be one of our top goals for the next 10 years. We must again work hard, together, to fulfill this mission.