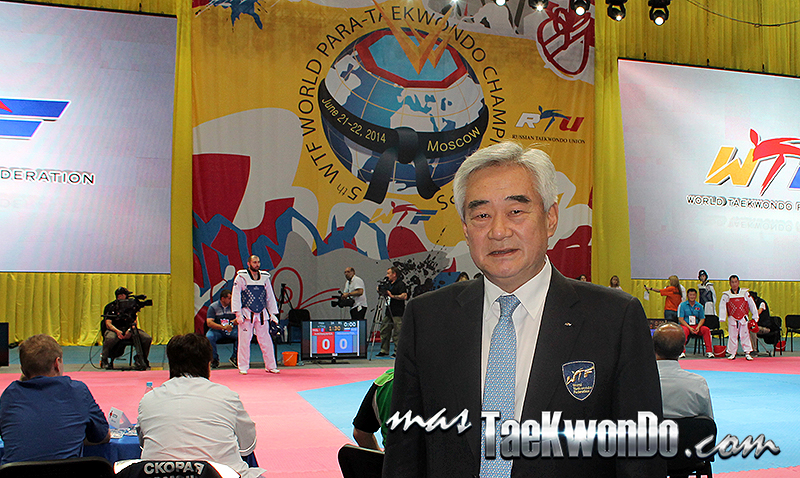 Sitting in the office assigned to him in the Dinamo Sport Palace, while the first day of competition was being held, we had the opportunity to know Dr. Choue´s views on the development of Para Taekwondo.

“It all started when I was elected president ten years ago, since then, I had in my plans to develop Para-Taekwondo, but was in 2005 when I visited Guatemala that was moved and touched by the programs that Mary Borello, President of the Guatemalan Taekwondo Federation was carrying out.  She has been dedicated and committed since that time to helping athletes with different capabilities. Certainly I consider Guatemala as one of the top countries in the world, like Canada, Turkey, Russia and Azerbaijan, which are working hard in the development of Para-Taekwondo. I tell you again, it was during this visit to Guatemala when I thought we should organize our own event. ”

During our talk, Dr. Choue shared with us many memories that came to his mind:  “In the award ceremony in 2009 in Baku, Azerbaijan, I had the opportunity to give the medal to a Turkish athlete who in tears she whispered in my ear, “Dr. Choue, I never thought I would be able to compete in an international event with this disability.”  Her words shocked me and gave her a hug and then told me again:  “Please don´t stop until Taekwondo gets to the Paralympics”.  And that, until today, has been my objective”.

This year is crucial for Para-Taekwondo, since in October or early next year at the latest, the International Paralympic Committee (IPC) will make the decision of whether or not to include our discipline in the Paralympic Games in Tokyo 2020. When asked if he was sure about the inclusion of Taekwondo in the Paralympic Games, he answered smiling:  “The decision is made by a vote process.  Of course we cannot not guarantee anything, it is as if you said that Spain or England would be the champions in the Soccer World Cup and they are eliminated in the first round, but of course we hope that we can achieve that goal as we are working to do so.”

With coffee, cookies and fruit, our talk with Dr. Choue continued bringing up some issues we have already talked with him in previous occasions; his recent tenth anniversary of his presidency in the WTF was brought up and we asked him if he had the opportunity to read the article masTaekwondo.com published on that special date:   “I was by myself in Yokohama, Japan that day.  While reading your article I made a time travel remembering these fabulous ten years.  But as I was all alone, I had to toast with myself with two glasses of wine … (laughs) I hope that on the occasion of this great event, I can celebrate with everyone. “

Regarding the classification process that for the first time was carried out by professional specialist in the Paralympic sport, Dr. Choue was pleased and said:  “In the first edition of this type of competition, we did not know the classification of the athletes according to their physical disabilities.  For this fifth edition, our committee has done a tremendous work and made a thorough investigation at this respect.  As a result, we have implemented the new classification process.  We are aware that must have a continued improvement, but we are much more professional than back then”.

We have witnessed many achievements during the ten years of Dr. Choue´s leadership in the World Taekwondo Federation, but the inclusion of Taekwondo in the Paralympic core program, would the finishing touch for a decade full of successes. 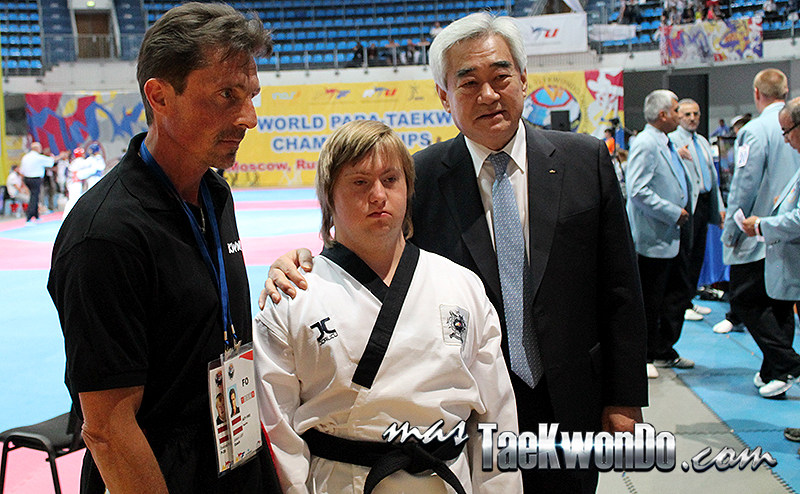