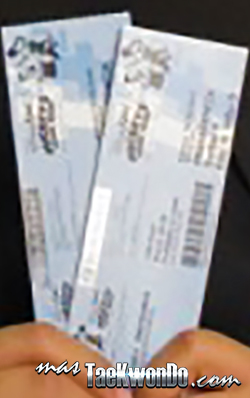 MasTaekwondo.com recently published a series of articles about the “surprising” changes the WTF makes day after day.  One of those articles that caused a stir was the one related to the system of granting the Wild Cards for the Olympic Youth Games “Nanjing 2014” to young athletes without any experience nor any track record.

Additionally, we recently published a list of countries that will receive the benefit of a Wild Card for the Olympic Youth Games, but considering the situations experienced in Singapore 2010, we think it is dangerous and serious to give the chance to compete at this level to young athletes who have no competitive experience at all. (See: 2014 Wild Cards to Nanjing, ” like giving a gun to a child”)

As to clean up that image, the WTF included in its qualifying manual for Rio 2016, the way in which the Tripartite Commission will select the “deserving ” athletes to fill a place in the Summer Olympics.

Proud of believing that they are generating an effective “filter” that will guarantee the athletes´ physical integrity and high competitive level, the WTF implemented a series of requirements that an athlete should comply in order to be able to go to Rio 2016 through an invitation.

By reading the above, we assume that not any athlete would be able to go Rio; however, by reading the requirements we found out that the degree of difficulty to be able to receive a Wild Card is almost is nonexistent .

According to the World Taekwondo Federation, the athlete must comply at least with “one of these requirements” :

Any of the five requirements set by the WTF as filter to award a Wild Card is really very simple to comply, proving once again that some athletes would be able to get to Rio without deserving to be in that privileged place for two reasons 1) Because they do not have enough credits and 2) Because their physical integrity will be at risk.