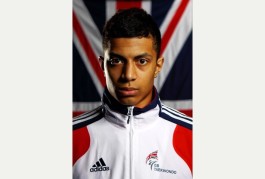 Ruebyn Richards claimed a place on the podium at the European Taekwondo Championships to take Great Britain’s medal haul to seven in Baku, Azerbaijan, posted nottinghampost.com.

The GB total equalled the haul achieved when the championships were last held two years ago in Manchester.

And Nottingham-born Richards (-68kg category) did his bit with a bronze, although was denied a title shot when losing to a Russian fighter in the semi-finals.

Richards’ defeat to second seed Alexey Denisenko was heart breaking. A close contest went to golden point overtime and with no further scoring, Denisenko was awarded his passage into the final on the referees’ call.

“I can’t be disappointed with a medal but to lose the way I did, with it being so close, is so frustrating,” said 21-year-old Richards, who came into the GB Academy in Manchester via the initial Fighting Chance talent ID initiative.

“I fought so well all day but I could have done more and it would have been me in the final.

“Those are things to work on, to turn this bronze into gold next time. But I’m improving and I’ve worked on extending my leads in fights rather than playing safe, which I did in the early rounds.

“I’m now looking at Suzhou in China (July 4-6) and hopefully competing on the world stage in my first Grand Prix.”

His quarter-final against Germany’s Daniel Manz was less expansive but a disciplined performance brought up Richards’ third victory.

He then trailed 20-year-old Denisenko, a London 2012 Olympic bronze medallist, going into the final three seconds only for a body shot to tie the scores at 5-5.