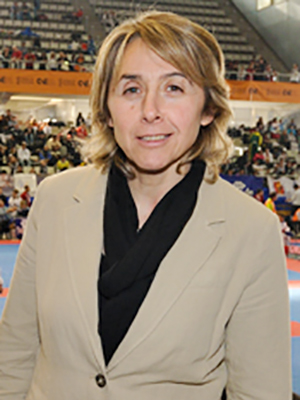 With many years as a trainer in the CAR of Barcelona, Elena just started in her new position as the Technical Director of the Spanish Taekwondo, after the recent departure of Jesus Tortosa , who served in that position for the past nine years, as informed masTaekwondo.com in its Spanish version (See relatated article  in Spanish).

Elena Benítez was present in six Olympic Games; three as an athlete and three as a coach.  She became, at 21, in the first woman from Malaga to attend the Olympic Games in Seoul 88 in what was the Taekwondo debut in these huge events.  Later, she got the Gold in Barcelone 92.

Benitez´ story is a chain of successes in her career as an athlete and later as a coach. She got to the top of the podium many times, and then she saw the glory of her own athletes, culminating in the last London Olympics with a Silver Medal gotten by the triple world champion, Brigitte Yague .

Since she retired in 2000, after the Sydney Olympic Games, Elena Benítez decided to give back Taekwondo what it this sport gave her.  “My students see me as someone close. If I could do it , they can ” said just shortly before London 2012.

Now she has to grow in another role that perhaps will take her far from the coach chair and will place her in a more strategically position, and she would have to adapt to her new role as she did when she turned from athlete to junior coach, then to senior coach and now as a Technical Director.