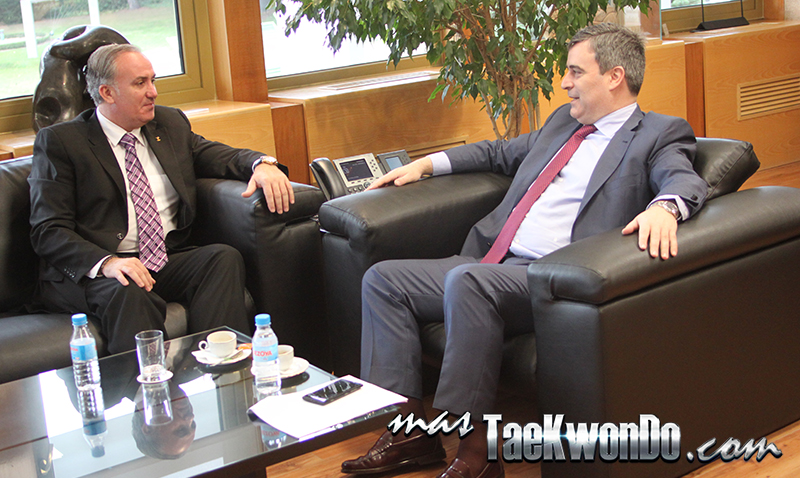 The publication cited states that a total of eleven federations were taken over; important federations such as Aeronautics, Athletics, Bowling, Boxing, Fencing, Rowing, Rugby, Olympic Shooting , Triathlon and Vela, all by the CSD.  To that respect, Jesus Castellanos , president of the RFET says ” … we were not taken over,  all federations had to submit a viability plan to the CSD; all the federations mentioned in that publication failed in achieving the surplus originally desired… “

He continued explaining: “…they proposed that all federations make a viability plan;  Taekwondo had a surplus of more than 32,000 Euros,  which is not bad considering the present times.”

The federations are carrying out a viability plan, which together with the CSD are trying to comply.

“During a meeting with the CSD, we tried to explain why our Federation did not have a larger surplus, but this is a different thing, quite different than being taken over” said Castellanos during his talk with masTaekwondo.com.

Last Friday ( 16/05/2014 ) masTaekwondo.com published an article informing about the intervention of sports federations, including Taekwondo by the Council Sport.

Apparently Castellanos contacted the President of the CSD to explain the incident and he would have confirmed that the story was totally false by showing his support with a press release with the headline ” The CSD supports Taekwondo Federation “ , which was published in various newspapers and in the  CSD Twitter account.

When masTaekwondo.com asked if this was an audit, he replied: “The annual audit is not finished yet.  But it is very easy to understand what happened: we presented a viability plan to the CSD where we had planned to present a surplus of 145,000 Euros and at the end we only presented a surplus of 32,000. That is why they are asking us to clarify the situation and explain why we did not reach the goals previously planned” explained the RFET president.

“But publishing that the Royal Spanish Taekwondo Federation along with 10 more federations were taken over by the CSD is trying to create a false alarm and it does not benefit Spanish Taekwondo because we are struggling every day to be at the top and be recognized worldwide”.

“We, as representatives of the Spanish Federation, understand the fact that MasTaekwondo.com echoed the story published by some local newspapers, and that logically, read as it is, it can be alarming.  However, when, in the same report, it states that there would be a RFET Board meeting soon and the article ends with the question   “What would happen to Jesus Castellanos and the Spanish Federation?”; this question certainly seeks to create unfounded concern, but it had just the opposite effect since all the Board members gave the   100% support to the President and his management.  All the members were angry due to the confusion this article generated.  Today the Spanish Taekwondo Federation is more united than ever; we have clear objectives and we won´t allow anyone to try to destabilize us.” said the RFET leader.

“Only one year during my administration, we finished with a 9,000 Euros deficit;  the remaining eight years, we had  a surplus.  It is important to mention that when I started my period as president the Federation had a debt of over 1,000,000 USD. Last December 2013, we paid the last 106,000 Euros pending of a loan of almost 700,000 Euros given by the CSD. That is why it is disturbing and painful to read such news that creates just confusion” said the president obviously annoyed by the situation.

We did not want to miss the opportunity and asked him about the dismissal, resignation or whatever is going on with the Technical Director of the Spanish Federation , Jesús Tortosa , to which he replied :

“I will have a conversation with him. I ask you to give us a little time to see the whole thing. He is no longer working with the Spanish team, but I want to be very discrete as we have not officially informed about this situation. We have not communicated anything to anyone, we need to resolve the issue; however, we can confirm that he is no longer on the coaching staff.”