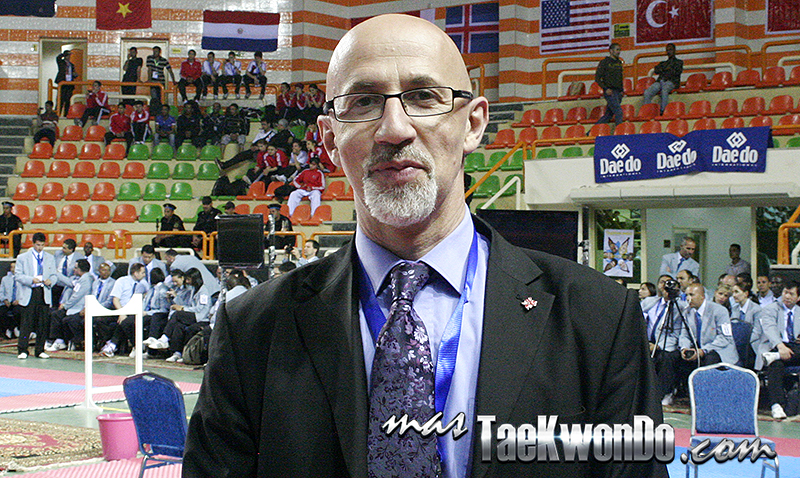 Taekwondo has evolved in the last years during Dr. Choue´s leadership.  Each one has played an important role in the development of Taekwondo.  From your perspective, what can you tell us about this development process?

Yes, our sport has developed and improved in the last years.  For the last Olympics in London, we changed the rules, focusing on the electronic protectors and the video replay system; as a result we had a stunning event.

Additionally, as you know, we have changed the way to qualify athletes to the Olympic Games since we have implemented the WTF Ranking.  The first six best ranked athletes will be qualified directly to the next Olympics.  The fact of having the Grand Prix and the “G” events to sum ranking points makes the process even more transparent.

Now, we are also working to standardize the calendar of events, because in previous years there was only one world qualifying tournament and it didn´t represent a problem if its date was changed.  Now, that is not possible.  You cannot change scheduled events once they have been made public since athletes and coaches must have the respective planning in order to participate in the events that will lead them to reach their goal.  We are making our efforts to improve those situations.

As masTaekwondo.com published a few weeks ago, the WTF has recently announced that there will be another series of the Grand Prix, a situation that alters completely the MNAs´plans.  In addition to this, the dates of the events were not clear.  What do you think about it?

Yes, it was in March that we finished planning the “2014”.  An international federation cannot do that, it is not possible that we are planning in March what we will do within the year that started three months ago.  I will make my best effort to have the schedules in advance.  The ideal situation would be that in March 2014 we would have planned the 2015 or 2016 schedule.  I spoke with WTF Secretary General a few weeks ago and we agreed that in the next two months we should be working on the 2015 and 2016 schedule.  People must be informed about the event schedule in advance.

You are the Chairman of the WTF Games Committee but additionally you are part of the WTF Technical and Development Committee.  Could you explain to us who else is in this committee?

Nowadays, the coaches are professionals and athletes train many hours a week, then our work has to be at the same level as theirs.

What, then, would be your main goals within your functions in the WTF?

To me, it is pretty basic:  to manage in an effective and efficient way the calendar of events.  My intention is to have the schedule for the next eight years, I mean: two Olympic Cycles, World Championships, Continental Tournaments and Grand Prix Series, 3 or 4.  The MNAs must have a firm argument in order to request funds to government entities in their countries.

The Ranking information must be issued to the public each month on time, so that all   the information regarding the ranking points belonging to one athlete is very clear.  So I will work very hard to make a professional calendar.

Can we assume, then, that the last-minute decisions on very important events were not taken unanimously by all the WTF team?

Look, the point is that we should all turn our energy to make the best decisions or to modify rules. Our management has to evolve, things have to be more stable and not change them at the last minute.  For example:  a document stating that the best 36 ranked athletes would invited to the Grand Prix, was issued.  But now it has changed.  Now, it is said that only the 32 best athletes will be invited.  This kind of thing must not happen.  We are all clearly seeking to work in harmony; however we must make the right choices together as a group.

We learned about a funny story that happened in the German Open, can you share with us?

Sure, I was the Technical Delegate for the German Open, and in order make the seedlings we needed the updated WTF ranking. We search in the WTF official web, but it wasn´t updated.  So finally, we went to masTaekwondo.com web and we found it. Updated!  MasTaekwondo.com was the only digital paper that had such information!  (Laughs).

Another thing that happens in the ranking is the fact that some names are mistakenly written in different ways, so, I think the ideal would be to be guided through the WTF license number to avoid any misunderstanding and misspelling.

Except for the changes you have mentioned, it is clear that the activities carried out by the different WTF committees have brought us positive changes and good work.  Would you like to add any comment?

Thank you very much for what you just said.  I really think that we must work together for the benefit of Taekwondo.  I just want to take this opportunity to congratulate masTaekwondo.com, a digital paper that is doing an incredible job bringing us essential information; we can find in your web any information about of sport.  I am confident that together, the WTF, the committees, the media, the athletes, the coaches, we can make great achievements. Taekwondo is an amazing spectacular sport and we must use this characteristic the best way possible.

Thank you very much, Philippe, for your time.

Thank you very much and congratulations to the masTaekwondo.com Team