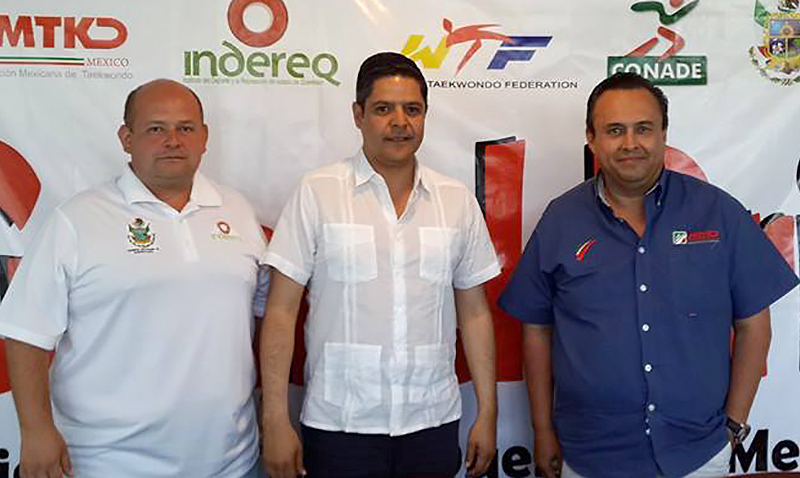 “There will be three events:  the first one, the World Grand Prix will be on December 11-12.  In this competition, the best eight athletes of the world in each category will be present.   It will be like an Olympic Games, where each combat will be like a Final, because the athletes will be the best.  This event will be G-8 and will award 80 points for the world ranking. Later on December 13, we will have the WTF Gala Dinner where they will give recognition to the best in Taekwondo worldwide.  Then, on December 14-15, the WTF World Cup Team; this will be a G-4 event and will award 40 ranking points” said the president of the Mexican Taekwondo Federation.

Additionally, López Delgado also acknowledged the support of the state governor, “he said that we could go ahead, that Querétaro was ready to be the host city and that we would improve what he had done in Puebla last year.  I am sure we will overcome the expectations and it will be a great show. ”

Solorio Pedro Hernandez, Director of the State Institute of Sport and Recreation (Indereq) confirmed that Queretaro will host these huge events even though Manchester, China, Qatar and Kazakhstan presented their application.  “Mexico won because Taekwondo is rooted in the Mexican society, generating also a significant economic benefit for the state”.

The Grand Prix and the World Team Cup will be carried out at the Congress Center, where the access to enjoy the best athletes in Taekwondo will be free.  MasTaekwondo.com, as usual will give a complete coverage of all the events.