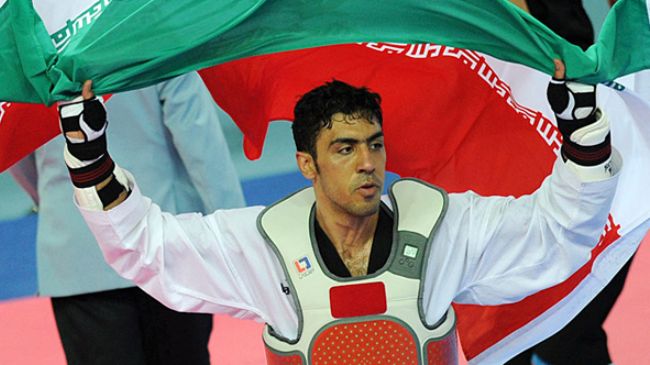 On Sunday, Iranian taekwondo practitioner Alireza Nasr Azadani overpowered his Spanish opponent in the final match of the minus 74-kilogram weight category to clinch the gold medal, according to the information issued by presstv.ir.

The 28-year-old athlete had routed rivals from Brazil, the US, Italy and Spain in his march to the final.

Earlier in the day, Sajjad Mardani overwhelmed his Egyptian competitor in the final competition of the +87-kilogram class and was awarded the gold.

Baqeri Motamed, a silver medalist of the 2012 Olympic Games, also trounced Spain’s Ruben Martinez Garcia 14-4 in the final match of the minus 68-kilogram category and claimed the gold medal.

In the minus 87-kilogram class, his teammate Karami downed Canadian Marc-André Bergeron 5-3 to snatch the gold.

On Friday, Aboulfazl Yaqoubi bagged a gold medal for Iran, beating his Belgian rival in the final of the minus 58-kilogram weight category.

Iranian sportsman Farzad Abdollahi crushed his teammate Mehdi Khodabakhshi 9-6 in his last encounter to win the gold in the minus 80-kilogram class.

The 2014 Taekwondo German Open started in Germany’s northern city of Hamburg on April 11 and wrapped up on April 13.

The tournament brought a total of 865 taekwondo athletes from 62 nations together.