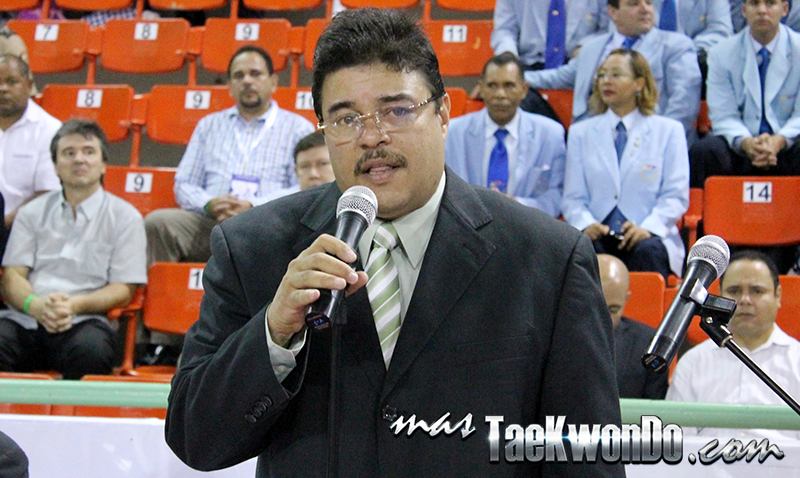 The qualifying tournament has finished and the complete Dominican Republic team is qualified. What can you tell us about this?

Why did you decide to organize a G-1 event in Dominican Republic?

Because of the economical problems we have been facing in our Federation, I understood that it was a good time for my athletes to compete in a big event after the qualifying tournament.  I was surprised by seeing the high technical quality seen in the event.  There were athletes from Egypt in this competition.  Financially, I cannot afford to take the athletes to Asia or Europe, as I did before, to sum points for the ranking. In fact, we had about 25 athletes in the ranking, however, today; I think we have 3 or 4 because we cannot participate in the competitions which award ranking points. So I embarked on this project, which meant a sacrifice for all the Federation team.  We counted on the financial support of the Ministry of Sports, however they failed.  We have a tiny amount of 500,000 Dominican pesos (USD 11,700) to carry out an event of this magnitude.  That is why I thank the CRESO program, a group of businessmen that believe in youth and sport.  They are giving us their financial support for the Taekwondo National Team.  I also want to thank the National Olympic Committee and my fellow colleagues that came to support this event.

Although your athletes are not competing abroad, yet they were able to obtain 16 places for the Central American and Caribbean Games.  What is the formula for the success of your team?

We have worked intensely to strengthen our weaknesses internally.  Our method is to choose our team and keep the athletes in constant training to gain experience.  Our national competition was held on January 7; it was carried out on that date with the purpose that our athletes were focused in the competition and put away the Christmas holidays, food and alcohol.  All of them wanted to be part of the National Team, so everyone was focused.  We had three selection processes, so, our athletes kept training hard for about five months, with the firm decision that they were part of a team that would represent our own country.  I think that was the key to the high level they showed in these competitions.  We have three teams in our Federation, and any athlete has the competitive level to be the number one in his/her weight division; that fact motivates the internal competition.  We are also bringing new athletes from the province and we carry out national competition to substitute the international competitions.

Similar to the method used in Cuba, isn´t it?

Well, we are doing benchmarking, we have to learn and cope with our reality.  We have to continue working hard so all the work we have done during a lot of years does not just blow out.

What is his opinion about the Caribbean region, from your role as vice president of the area for PATU?

I think that the Caribbean region should not be ignored.  There are 22 nations, in this region, including islands very economically depressed. I think the only way we can make our region compete on equal terms with Central and South America is investing money. I’ve always said that sport is a very simple equation, achievements in sport are directly proportional to the investment that you make; if we do not invest, we will never grow or develop.  I presented a Technical Project to be applied to the Caribbean Region to the PATU leadership, including a budget.   It is supposed that this period will be dedicated to the Caribbean.   We have the tools, we have the budget, we have the plan, now we will implement it; we will develop and increase the Taekwondo technical level in this region.  We will capture all those islands so that this region becomes a “monster” in the political aspect.  If we are united and go together to any WTF General Assembly, we will be strong; 42 countries are not the same as 15 or 16 countries.

They will have to listen to us.  Can you imagine 42 voices saying the same thing and out loud.

PATU has a structure which divides the continent by regions and has a vice president appointed for each region.  The question is:  Do these vice presidents work? Do you consider that they have political influence?

I don´t know about the others, I don´t know if they work for their region or not, but as far as my position is concerned, I am used to work hard and make proposals.  Because I don´t like leaders who just eat and raise their hand.  I am in a position in which I am listened to and in which my opinion is taken into account.  I understand that it is the same for my colleagues in other regions.  As I mentioned earlier, we have a plan to implement in the Caribbean region and I’m patiently waiting for the PATU to implement it and take action.  In fact during the last meeting we had at the Hotel Hamaca they informed that there is budget for each of the PATU regions.  That´s great news, because we are started to crawl, hopefully in a year or two, we will be walking and waiting to run.

Regardless of economic difficulties you have already mentioned, what has been your evaluation about these events?

Very positive.   I have seen a very good technical level; a lot of people have said they are surprised by seeing athletes with such a high technical level, especially in the Santo Domingo Open, where many experienced athletes have come in search of the ranking points, being this G-1 event.  We had around 23 Olympic and World medalists which is very difficult to reach, especially in a small island like ours.  I thank God , I thank all who have supported us , especially masTaekwondo.com in the promotion of this events,  which, I am sure, motivated a lot of athletes to come to Dominican Republic .  I want to thank everyone who has supported us financially, as CRESO Program, all my fellow colleagues from Dominican Republic, my fellow colleagues from Central American and the Caribbean region, and to you.  Thanks again to all who have supported us and I tell you that we will continue to work hard regardless of the difficulties.

Thank you Francisco and again, Congratulations!