According to newfanzone.wordpress.com, in continuation of its “Inspire the Future Campaign” launched last year, three time Olympian and founder/chief executive officer of Chika Chukwumerije Sports Foundation (CCSF), Chika Chukwumerije at the weekend in Lagos inspired 172 taekwondo Kiddies between the ages of 4 and 16.

The event which was held at the Abesan Comprehensive School, Abesan Estate, Opaja, Lagos, witnessed scores of parents and members of the public come to watch the martial art maestro inspire the kids.

At the end of the programme, many parents who came to watch their kids as well as see the three-time Olympian were not disappointed. 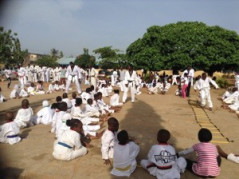 Mrs. Irabor Oyakwe said, “I have five children and all of them do Taekwondo. They were all inspired to start after they saw Chika Chukwumerije on TV. We are really grateful that he could come here. Look at the number of kids here from different clubs in Lagos, looking so excited and happy. It is really worth it”

Another parent, Michael Ugboko, who is also a World Taekwondo Federation (WTF) 3rd class International Taekwondo Referee and whose three kids attended the workshop, commended the CCSF initiative, noting the large difference in quality of coaching methodology on show at the workshop. He urged the CCSF to continue to add value through its annual competition and practical workshops.

Special guest of honour and double All Africa Games gold medallist as well as the current Vice-President of the Nigeria Taekwondo Federation (NTF), Mrs. Margaret Elizabeth Binga, was in attendance to witness the inspirational event.

Speaking to the kids at the end of the event, she stressed to the kids, the importance of participating in sporting activities, while excelling in their education, especially the female child.

The Nigeria Female Taekwondo legend, who was undefeated for 18 years in Nigeria (1989 – 2006), is an officer with the Nigeria Customs Service, and the only female executive in any of the National Sports Federations, stressed to the female kids that “education combined with sports, apart from the obvious intellectual benefits, would equip you with the right kind of emotional and psychological tools necessary to be strong, independent and society-building women.”

Chief Instructor of the Host Club, Lucky Ogumelen, thanked CCSF for honouring its invitation, and commended the quality of the training programme,

“Practically everyone that came today has never trained with ladders, cones nor done some of the exciting training drills Chukwumerije gave to them. Thus participants, not only gained a lot of inspiration, but also increased their wealth of practical knowledge. The kiddies’ experience with the Olympian would inspire and remain with them forever”. 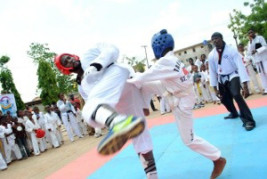 CCSF boss, Chika Chukwumerije, remained reflective after the event, “the spread of Taekwondo nationwide is impressive, but there is a lot of work to be done in transferring the right kind of knowledge to upcoming Taekwondo athletes across the country.”

He commended the instructors for the “fantastic job they were doing at the grassroots level, and encouraged them to take advantage of the National Coaching course the Nigeria Taekwondo Federation, led by George Ashiru, would organize in a couple of months, to update their coaching methods”

He again reiterated the need for the private sector to support Africa’s fastest growing Olympic Sport, “We need the private sector to take advantage of growing numbers and invest in what could be the ultimate CSR program. The Nigeria Taekwondo Federation, NGOs like mine, and various clubs across the country, need a lot of support in training these kids, whose numbers are doubling every other week.

Driving home advantages of programmes like this, he added, “genuine taekwondo training programme do not just develop people who kick and punch, they develop young minds to be creative, productive and problem-solving members of Nigerian society”