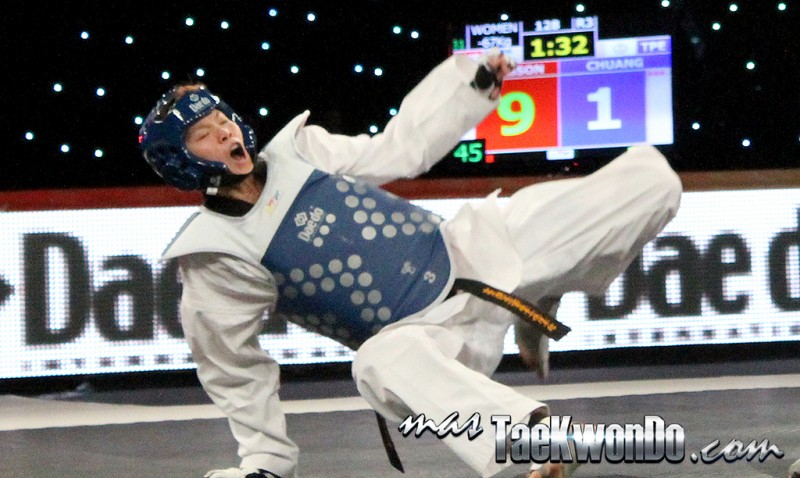 Just after the Grand Prix Final held in Manchester in December 2013, masTaekwondo.com launched a strong campaign through several articles and interviews criticizing the use of unstable and slippery mats, a situation that makes almost impossible to develop a normal combat.

When we published the article “Taekwondo or skating?” there were many athletes, coaches and even officials who agreed with our analysis  and we generated strong debate about this important issue, which is not new, as it has been happening for a  long time.

Slippery mats represent a problem not only for the athletes in Kyorigi (combats) but also in the Poomsae competitions, as they also explained how difficult it is to present a good competitive performance mainly in the Free Style.

In the “Full Access Pass” program, in our Spanish version, we talked exclusively with the World Champion, Uriel Adriano, Mexico, and Poomsae World Medalist, Leandro Rodriguez, Colombia, who both agreed on how detrimental to the competition and to the performance, was the use of new mats, as these always have an extremely slippery surface.

The last article published by masTaekwondo.com about this issue was the weekly  article written by Chava Pérez (El Semanario del Fauno in our Spanish version)  who titled his article “Las Resbalosas” (Slippery) addressing  the issue from a more ironic and incisive point of view but equally successful .

MasTaekwondo + (English) and MasTaekwondo Asia (Korean and Chinese) also joined the debate and translated the “Taekwondo or skating?” article on their respective web sites, sparking a deep debate about this important problem to the point that we found out today that the WTF will discuss this problem during their Executive Council Meeting at the 25th General Assembly to be held in China Taipei within ten days.

It is not the first time that an issue brought up by masTaekwondo.com is discussed in the WTF Council, and that fact fills us with satisfaction and pride, because our mission is not to copy and paste competition results or articles issued by other digital newspapers.  As a specialized commited digital media, we move into the global Taekwondo where the real news is born.

If our work generates changes that lead to improve things in our sport, we are confident that we are on the right track, and with our passionate work we are building a “better Taekwondo”.