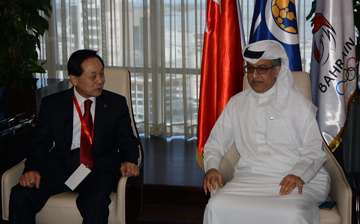 Supreme Council for Youth and Sports general secretary and vice-president of the Bahrain Olympic Committee Shaikh Salman bin Ebrahim Al Khalifa stressed the importance of boosting ties with the Asian Taekwondo Federation (ATF) to develop the standard of this sport in Bahrain, posted www.bna.bh

This came during his meeting with Vice-president of the ATF Lee Kyu Seok, who was in Bahrain to attend the Sixth Bahrain International Taekwondo Championship, which concluded recently.

Shaikh Salman affirmed that the continuation of this championship in Bahrain for the sixth successive year and after the many successes achieved on this level reflects the excellent reputation that the kingdom has obtained on the international level, and stressed the importance of maintaining these gains and promote them in the future.

The Supreme Council general secretary also stressed the significance of pushing the bilateral cooperation between the Bahrain Martial Arts Association and the ATF further ahead in order to benefit from this discipline.

On his part, Seok expressed thanks and appreciation to Shaikh Salman for the great hospitality since his arrival in Bahrain. He also congratulated Shaikh Salman on the tremendous success of the taekwondo championship , which reflects the abilities of Bahrain in organizing different sporting events.