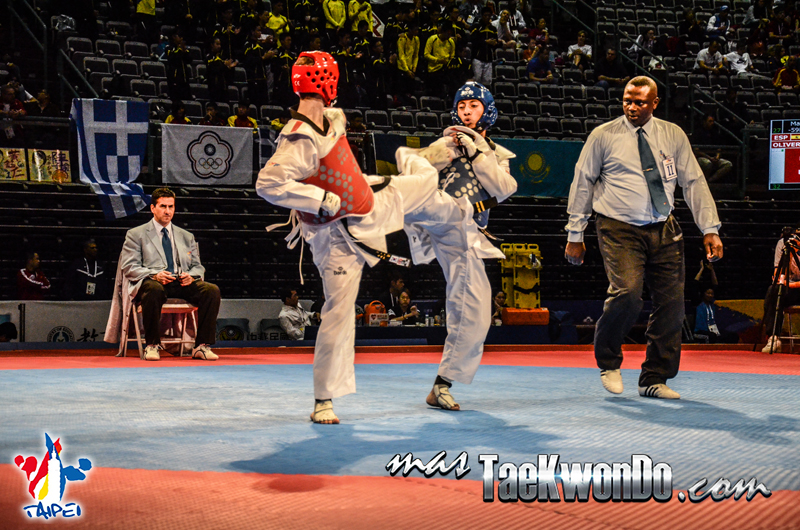 According to the offcial WTF Web site, Korea took both the men’s and women’s overall titles at the 10th WTF World Junior Taekwondo Championships in Taipei City, Chinese Taipei, which concluded its four-day competition on March 26, 2014.

The Great Britain came next with two golds and two bronzes for a total of 41 points. China followed with one gold and one bronze for a total of 36 points, while Germany ranked fifth with two silvers for 36 points.

The four-day biennial championships, which took place at the Taipei Arena in downtown Taipei City, attracted a total of 793 athletes and 472 officials from a record 107 countries. A total of 90 international referees officiated at the championships.

In the junior female -46kg weight division, Russia‘s Victoria Khan came from behind to beat Thailand‘s Napaporn Charanawat 3-2 in the final match to earn her country the gold medal. The bronze went to Iran‘s Nahid Kiyanichandeh and Spain‘s Tamara Miquel in the category.

In the junior female -55kg weight category, Croatia‘s Ivana Babic came from behind to defeat Korea‘s Geum–byeol Lim 11-4 for the gold medal. Iran‘s Mahsa Jeddi and Turkey‘s Fatma Saridogan won their respective countries the bronze medal in the same division.

In the junior male -63kg division, Brazil‘s Edival Pontes needed a fourth, golden-point round to earn his country the gold medal as he came from behind to tie the score 9-9 against Russia‘s Soso Kvartskhava in the final seconds of the third round. Turkey‘s Hakan Kavurat and Italy‘s Simone Crescenzi shared the bronze medal in the same category.