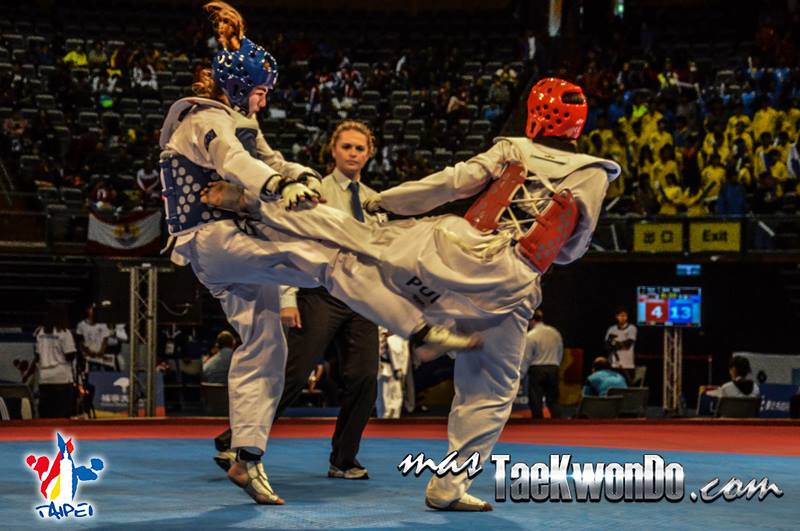 On the opening day, Azerbaijan took one gold and one bronze to top others in the overall medal tally, followed by the United States, Serbia Ukraine and China with one gold each. Italy came next with one silver and one bronze, while host Chinese Taipei clinched two bronzes informed the WTF in its main web page.

The biennial World Junior Championships, which takes place at the Taipei Arena in downtown Taipei City, have attracted a total of 793 athletes and 472 officials from a record 107 countries. A total of 90 international referees officiate at the championships.

All the matches are conducted on octagon-shaped mats, and a protector and scoring system and an instant video replay system are used at the event.

In the junior male +78kg weight category, the United States’ Brandon Ivey needed a fourth golden-point round to earn his country the gold medal against Jordan’s Hamza Kattan. In the division, the bronze was shared by Russia’s Emil Khadeev and Korea’s Jun-sik An.

In the afternoon, there was an opening ceremony of the 10th World Junior Taekwondo Championships, which drew WTF President Chungwon Choue and WTF Council members.

Also in attendance at the opening ceremony were Lung-Bin Hau, mayor of Taipei City; Jow-Fei Ho, director general of the Sports Administration of the Ministry of Education; Hong-Dao Lin, chairman of the Chinese Taipei Olympic Committee; and An-Chin HSU, president of the Chinese Taipei Amateur Taekwondo Association.

“We have already witnessed great performances of our junior athletes and fantastic support of the organizing committee for the past two days of the WTF Qualification Tournament for the Nanjing 2014 Youth Olympic Games. Congratulations on the qualifiers and appreciations to all athletes who came here after years of hard training and tough competitions,” WTF President Choue said in his speech at the ceremony.

He continued to say, “Chinese Taipei is one of the front runners in global taekwondo and has produced numerous medal winners at the Olympic Games, World Championships and international taekwondo tournaments. I am sure the people of Chinese Taipei are proud of their taekwondo sons and daughters.”

“Since its inauguration in 1996, the WTF World Junior Taekwondo Championships have served as a stepping-stone for youth to elevate themselves into heroes and heroines,” he said. “Sports give youth something to aim for, something to hope for and something to dream about. It does not favor or discriminate against any age, physical condition, gender or culture. Sports inspire and empower those who practice them, and taekwondo is a sport for all.”

“A recent decision by the International Paralympic Committee to shortlist taekwondo for the official program of Tokyo 2020 Paralympic Games reflects the value of taekwondo as a true sport for all,” Choue said.