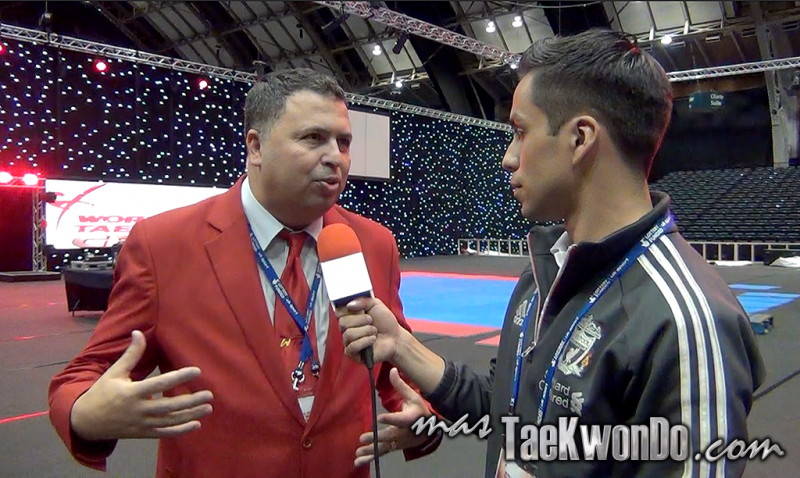 Chelbat, who in August will turn 50, has been recognized as one of the best referees in the planet.

Almost ten years ago (Madrid 2005) he was awarded as one of the Best Referees in the World Championships and three years later  his image transcended beyond the scope of our sport after being attacked by the Cuban athlete Angel Valodia Matos, after Chakir disqualified  him for exceeding the medical  treatment time limit.

As of 2009, he started leading the WTF Refereeing Committee and has his peak point during the Olympic Games in 2012, where Taekwondo refereeing worked exceptionally.

We recently met him and did not want to miss the opportunity to talk with him.  In that conversation he confirmed his nomination for Chairman of the Refereeing Committee for the next period.

We know you have a vast experience in the WTF and especially the WTF Refereeing Committee.  What has been your experience over the years and especially in the recent years when changes in the competition rules have been constant?

Actually, I have been blessed as I had the opportunity to work as chairman of several refereeing committees in the past and learned a lot from each one of them. I helped and collaborated, and most importantly, I learned a lot.   All that experience helped me to develop my abilities, my skills and my knowledge.

When I started my career as a referee in the WTF, I gave my support to the institution because refereeing is my passion.  I wanted to learn more about refereeing, and wanted to make it transparent because in the past it wasn´t; it was not clear.  Today we can say that it is more transparent.   At the same time, I also kept studying to improve myself.   So as I say, I’ve been blessed and I feel happy and proud that Dr. Choue appointed me again as Chairman  of the WTF Refereeing Committee  which means that I will work much harder .

That´s right.  We have learned that you have been reappointed as Chairman of the Refereeing Committee for the next period.  How did you learn about it?

A few days ago, checking my email I received the news of Dr. Choue. In addition, he also appointed me Vice President of the WTF Technical Development Committee, along with my dear colleague, Philippe Bouedo, who was also appointed as Vice Chairman of this committee.

What are your goals for this new period?

My goals are to maintain transparency and fair play.   We will also evaluate the competition rules in conjunction with the Technical Committee. As you know, transparency starts from the grassroots. As you have seen in the Grand Prix, there have been no errors or problems. Human error can happen, but it’s not intentional. All referees and judges have done an outstanding job, but we should emphasize training and education for both referees and judges in order to achieve and maintain consistency in the application of the competition rules throughout the world. We must achieve the unification of criteria worldwide.

We also need to increase the level of transparency.  Now we have the PSS, the Video Replay and soon we will have the electronic headgear. We must work together with the Technical Committee and the PSS Ad Hoc Committee.

As we know, the electronic headgear represents an evolution in Taekwondo competitions. It is a new future.

Do you think the electronic headgear is close to be approved?

As you know and as you have been reporting, there are several tests that are being carried out in Europe.   In the European Championship they were tested and the results showed that the system is working better. At least it is minimizing errors.

Sometimes corner referees are not able to see the kicks to the face, since the speed of actions does not allow them to see them clearly. With the electronic headgears we seek to minimize such failures.

Do you think that they will be approved for the next Olympics?

This is not final.  We will continue working and carrying out test in different countries and on different continents, just as we did with the PSS. We analyze what is right and what is wrong, to further improve the system. We are confident that we are on the right track.

Chakir, thank you very much for your time and congratulations on your nomination for Chairman of the Refereeing Committee.  You deserve it.

I would like to thank masTaekwondo.com for the work you have been doing during these past years and I would like to emphasize that this Grand Prix is historical; we are witnessing the evolution of Taekwondo.   The city that will host the next edition of the Grand Prix will have to work much harder because here in the UK, they have done an excellent job.  The level of the athletes has been outstandingly high; we had here the best of the best.  We also had the best coaches and judges.   Again, we are witnessing the evolution of Taekwondo.