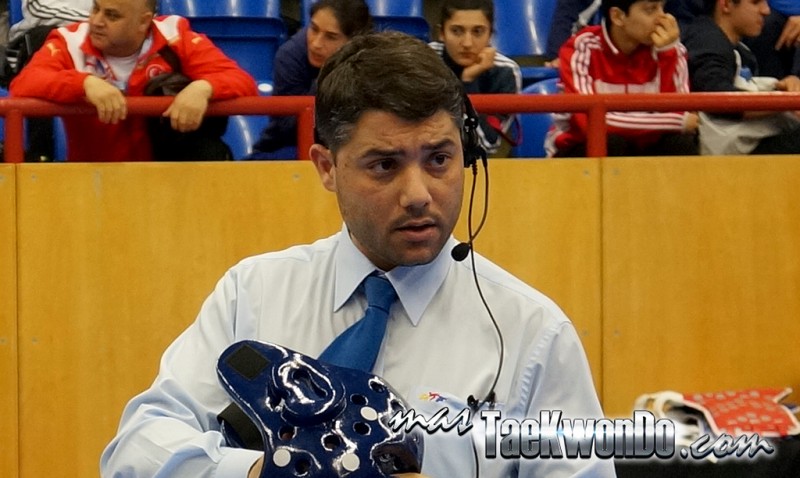 MasTaekwondo.com had access to exclusive information regarding the project that Chakir Chelbat, Chairman of the WTF Refereeing Committee will submit to the WTF Technical Committee during the WTF Executive Committee meeting to be held in Taiwan on the occasion of the World Junior Championship and Olympic Qualifying Tournament for YOG 2014 to be held in New Taipei city between March 20-26.

Chelbat´s proposal promises to be innovative and it will speed up the process of requesting a video replay without interrupting too much the development of the fight as it happens today. The red and blue plastic cards will be replaced for the “Head Set”, which will be given to each coach with a direct connection to the central referee and chief of the Video Jury.

The  “Head Set” will include a microphone , headphone  and a manual switch.

After the approval of this system, when a coach determines that an action should be reviewed by Video Replay, he must press the switch which automatically will turn on a light (red or blue) on the Video Jury table.   They immediately will speak through the headset to the central referee  to stop the fight and then,  using the same means, they will ask the coach what action he wants to be reviewed and why.

Following this , the coach´s headset will be silent and communication will be on between the Video Jury and the Central Referee to whom the Video Jury will inform if the claim is valid or not.

When a coach loses his opportunity to protest, his switch will stop working and he cannot interrupt the combat.

Chakir Chelbat´s idea was used in the Trelleborg Open in Sweden and it worked perfectly, speeding up all the video replay requests in which the system was tested.  It is speculated that this proposal will be accepted by the WTF Technical Committee and soon we will see the “Head Set” in all official events.