In the message, addressed to the global Taekwondo community, Choue stressed that 2013 was very successful for the WTF due to the large number of objectives achieved. Among them was the confirmation of Taekwondo in the core Olympic Programme for Tokyo 2020, the WTF 40th anniversary, the WTF World Taekwondo Championships in Puebla, the World Poomsae Championships in Bali, the World Team Cup in Ivory Coast and the Grand Prix debut held in Manchester last December.

According to Dr. Chungwon Choue the decision made by the International Olympic Committee to confirm Taekwondo as one of the 25 core sports on the Olympic programme in 2020 is 2013’s best achievement. However, in our humble opinion and based on our experience, all the masTaekwondo.com team can say is that we watched the best world championship in the history of the WTF.  Everyone knows it was held in Puebla Mexico last July,and again the Mexicans showed their expertise in the organisation of a high level international event.

There will be a lot of discussions about the professionalism of Taekwondo after the Grand Prix launch last December. But without any doubt, I am convinced that if one day our sport turns “professional” it will surely be after an event held in Mexico. Many can boast of being good hosts but the Mexicans have set a precedent that any would find hard to follow.

The president of the WTF could have separated the achievements and have given both, the World Championship and the OIC confirmation the same importance.  The confirmation of our sport in the Olympic program is a great achievement. Certainly, no one can deny the hard work and effort shown by Jean Marie Ayer, WTF Secretary General, who even had to hide or mask sensitive political situations that could have dirtied our sport and some of its most highly ranked officials.

As mentioned before; the World Championships organized by the Mexican Federation showed that many international federations have developed administrative and logistical assets, and the ability to host high quality international events.  Undoubtedly, Mexico could have hosted and organized the World Championships without the WTF collaboration without any problem.  The group of people working in the Mexican Taekwondo Federation makes the running of such high caliber events appear easy.

I agree with Dr. Choue, the importance of celebrating the “40th Anniversary” since the evolution of our sport in four decades was constant, and it would be unfair to deny that during his leadership the most radical changes happened. The transformation of Taekwondo into a sport that, fifteen years ago, would have been impossible to imagine has only been achieved under his leadership.

On the other hand we had the Grand Prix, an event that promised to be the birth of a spectacular show that optimists presented as the “NBA” of Taekwondo. It assured to take us to the professional stratosphere and generate interest from commercial companies and mass media.

The Grand Prix was held, and masTaekwondo.com was there.  The truth is that, while the level of the combats were very high, taking into consideration that the top 32 ranked athletes were participating, the Grand Prix could have quietly been performed behind closed doors – the quantity of expected fans was low.  There were virtually no commercial stands and the presence of international officials was really poor.

The GP first edition was held in Manchester, UK, a place that has the infrastructure and financial resources needed, but my question is: Are all countries able to host a professional event? Will the organizational and logistical high quality level be maintained?  Will the mass media keep its interest in our sport if the event is held in other countries other than Great Britain, Mexico, Russia or Korea? 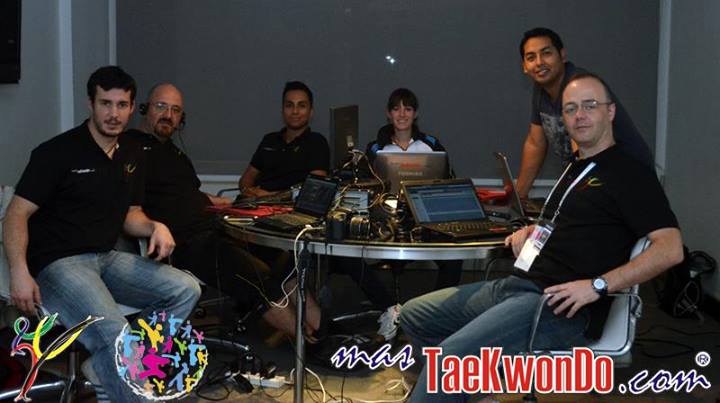 MasTaekwondo TV got stronger in 2013 and “masTKDsports” was born, interviewing all world and Olympic medalists and Taekwondo’s top leaders. Another great achievement was the arrival of “MasTaekwondo Asia” another site of the MasTaekwondo, S.A. Group, published in Chinese and Korean language, further expanding the horizons of our media.

MasTaekwondo +, the English version, has reached the most remote places on Earth, giving our advertisers the confidence that their product will reach the world market.

In social networking, the masTaekwondo.com Facebook site has become the most visited, even surpassing the WTF official site.

We have been Consultants for major world sports media as ESPN, BBC, etc, giving them support on technical aspects of Taekwondo.

MasTaekwondo.com was the only specialized sports media present in the Session of the International Olympic Committee, where the future of our sport was decided, and sharing space with major world newspapers.

We provided the best press coverage on a world championship; the best championship in Taekwondo history held in Mexico with a team of eight professionals.

With no real competition in the market, we seek to surpass ourselves every day and this year the challenges are even higher.

During 2014we will face again great challenges but are determined to keep evolving and improving.  We aim to share with you our feeling and experiences, as we dream of a better future for our sport.